The police said he would be taken to jail when the doctors allow him to be discharged after treatment. 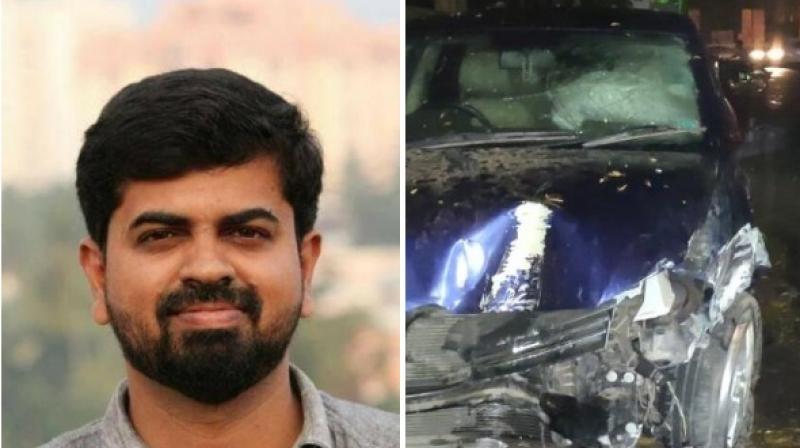 Thiruvananthapuram: An Indian Administrative Service (IAS) officer Sriram Venkitaraman, who was arrested on Saturday after a car he drove in an allegedly inebriated condition fatally knocked down a journalist here, was remanded in judicial custody for two weeks, police said.

The incident took place at around 1 pm on Friday in the capital of Kerala near Museum police station when K Muhammed Basheer, 35, who was the Thiruvananthapuram bureau chief of Malayalam daily Siraj was returning home. However, the officers could not save him despite rushing to the spot.

Basheer has a wife and two children.

The officer's blood sample was taken for testing at around 10 am on Saturday.

The 33-year-old IAS officer, who was appointed Survey Director by the state cabinet on Thursday, was arrested under Section 279 (rash driving on a public way) and 304 (punishment for culpable homicide not amounting to murder) of the Indian Penal Code.

"We have recorded the arrest of Venkitaraman at the hospital. We have charged him under Section 279 and 304 of the IPC," said an investigating officer.

The IAS officer, Sreeram Venkitaraman, was admitted in a private hospital. On Saturday night, the judicial magistrate went to the hospital and remanded him into custody, though he will remain to be in hospital during the remand period.

The police said he would be taken to jail when the doctors allow him to be discharged after treatment.

Apart from Venkitaraman, a woman was also in the blue Volkswagen car, the police said. "There were conflicting statements. We have now confirmed from independent witnesses that Sreeram Venkitaraman was driving the vehicle," Thiruvananthapuram police chief Dhinendra Kashyap told news agency PTI.

Initially, there was some confusion regarding the driver of the car and it is said that the driver was in an inebriated state. "There were conflicting statements. We have now confirmed from independent witnesses that Sreeram Venkitaraman was driving the vehicle," Thiruvananthapuram Police Commissioner Dhinendra Kashyap said.

Though Venkitaraman had earlier reportedly stated that his friend was driving the car, the woman in her statement told police it was the IAS officer who was behind the wheel at the time of the crash.

Parts of the motorbike and the car were strewn around and Basheer's slippers and some articles were found metres away from the accident spot. Blood stains were seen on the road.

Eyewitnesses told television channels that the car overtook some autorickshaws and hit the motorcycle at a high speed. Due to the impact of the collision, Basheer was thrown off his bike, suffering serious injuries and died on the spot.

The Kerala Union of Working Journalists (KUWJ) demanded a proper and truthful investigation in the case to bring the guilty to book. Transport Minister AK Saseendran said that IAS officers should set an example for others by following rules and regulations strictly.

Steps would be taken to cancel the driving license of the accused, he told reporters. Expressing deep shock and grief, Chief Minister Pinarayi Vijayan said the media fraternity had lost a member who had a bright future.

Leader of Opposition Ramesh Chennithala and Devaswom Minister Kadakkampally Surendran were among those who expressed grief over the death of the journalist who leaves behind his wife and two children.