India   All India  04 Aug 2020  All set for human trials of COVID vaccine in India
India, All India

All set for human trials of COVID vaccine in India

As of now, globally 141 vaccine candidates are being studied out of which 26 are in different stages of clinical trials 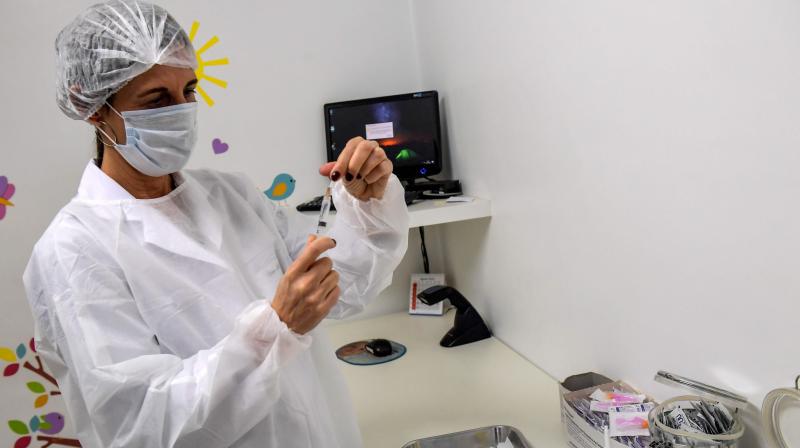 A doctor gets eady to administer a COVID vaccine to a person who volunteered for human trials. — AFP photo

New Delhi: Indian Council for Medical Research (ICMR) chief Dr Balram Bhargava said on Tuesday that three vaccines are at different stages of clinical trials in India out of which two are progressing well while trials on the third – the Oxford vaccine — are to start by next week.

Without giving an exact timeline how long it would take for these vaccines to be available for use, Dr Bhargava said the inactivated virus vaccine candidate being trailled by Bharat Biotech has completed Phase 1 of study at 11 sites and is now in Phase 2 trials. The DNA vaccine being trialled by Zydus Cadilla has completed its Phase 1 and embarked on Phase 2 in 11 sites. Phase 1 and 2 are safety and early efficacy studies.

The Oxford vaccine candidate being made by the Serum Institute of India, which got approval for Phase 2 and 3 trials on Sunday night, will start in a week at 17 sites.

As of now globally 141 vaccine candidates are being studied out of which 26 are in different stages of clinical trials.

“The pandemic is progressing rapidly and the development of vaccines takes time, not only in the science aspect, but also from social, cultural, and regulatory aspects… Once we have safe and effective vaccines we need to think about their fair distribution, prioritization, logistics of roll out and cold chain, stockpiling, training of people etc,” Dr Bhargava said. He added that though some mutation in the novel coronavirus has been noticed it is very minor to make much of a difference.

Health Secretary Rajesh Bhushan said the virus has spread into new areas but 82 per cent of all cases remain limited to ten states of the country. “50 district account for 66% of the total caseload of COVID-19,” he said.

According to the health ministry of the total deaths due to COVID-19, about 68% have been reported among male patients and 32% among females. About 37% of the COVID-19 deaths in India have taken place in the age group of 45 to 60 years.

So far 12.30 lakh persons have recovered while 5.86 remain under treatment. India's COVID-19 present fatality rate is 2.10 per cent.

The health ministry officials said that India on an average is conducting 479 tests per day per million population for detection of the virus and 28 states and UTs are performing more than 140 tests per day per million population. However, Chief Scientist of the World Health Organization, Soumya Swaminathan said India still has a much lower testing rate compared to some other countries and the country needs to increase testing.