India   All India  04 Aug 2020  Woman, kids swept away in flooded drain in Mumbai after heavy rains
India, All India

Woman, kids swept away in flooded drain in Mumbai after heavy rains 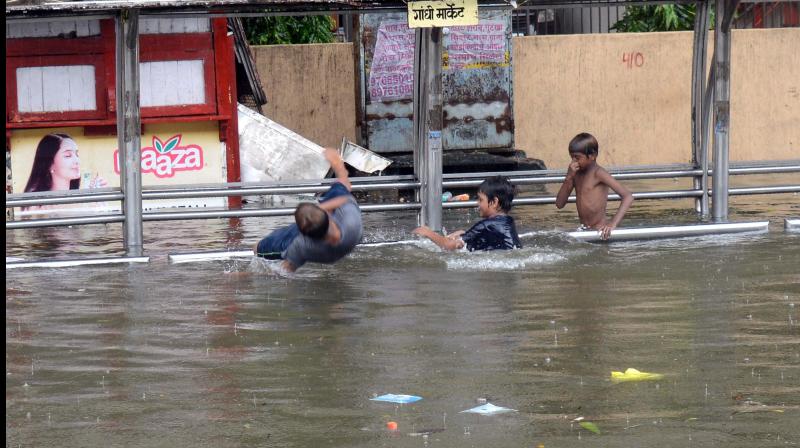 A family moves to safety after being caught in flooded waters caused by heavy rains at King's Circle in Mumbai. — Rajesh Jadhav photo

Mumbai: A 35-year-old woman and her two children were swept away in a swollen nullah after their house collapsed due to heavy rainfall in suburban Santacruz here on Tuesday afternoon, an official said.

The incident took place at around 11.30 am in Dhobighat locality, where a ground plus one-storey house attached to a nullah collapsed as rains lashed the area, the official from the fire brigade said.

A woman and her three children, aged between one to seven years, fell into the flooded nullah and were swept away, he said.

While the police managed to rescue a two-year-old girl before the fire brigade arrived at around 12.15 pm, a search is underway for the woman and her two other children, he said.

At least two fire engines, an ambulance, NDRF and other rescue teams have been pressed into service, the official said.

Meanhwile, The India Meteorological Department has issued a red alert for the Mumbai Metropolitan Region (MMR) and some other parts of Maharashtra for Wednesday.

The red alert was issued for the second consecutive day as rains have been lashing Mumbai and adjoining districts since Tuesday night.

"The red alert of extremely heavy rainfall at isolated places has been issued for Wednesday. The probability of it is very likely, which means it could actualise up to 75 per cent," an IMD official said here.

The alert was issued for Mumbai, Thane, Palghar, Raigad, Pune, Ahmednagar and Nashik districts, he said.

While the warning for Mumbai is only for Wednesday, that for Thane, Palghar and Nashik is for Wednesday and Thursday, the official said.

Extremely heavy rainfall is defined as a rainfall above 204.4 mm in 24 hours, he said.