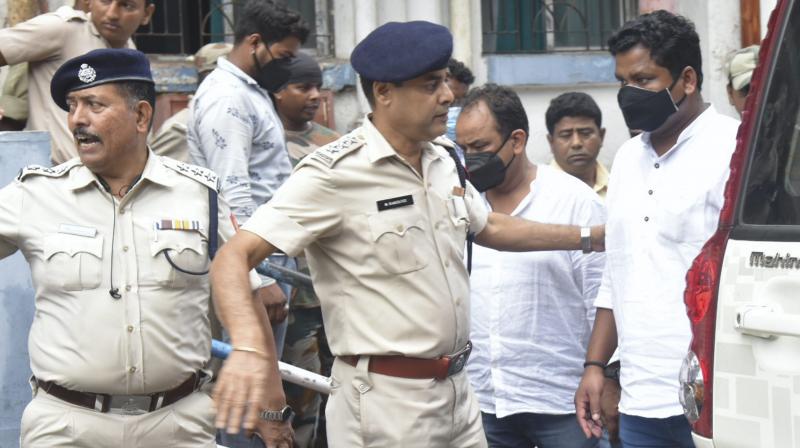 Kolkata: The West Bengal CID has claimed that two of its teams in New Delhi and Guwahati were prevented by the local police at the two locations from carrying out investigation in connection with the cash seizure from three Jharkhand MLAs.

A senior officer of the probe agency alleged its officers were detained by Delhi Police on Wednesday when they were conducting a raid at a property belonging to an accused, a close associate of the three arrested legislators, in the national capital.

Three Congress MLAs from Jharkhand -- Irfan Ansari, Rajesh Kachchap and Naman Bixal Kongari -- were arrested by West Bengal Police after over Rs 49 lakh in cash was seized from a car in which they were travelling.

"On Wednesday morning, a team of West Bengal Criminal Investigation Department (CID) officers was restrained by Delhi Police from carrying out a search operation at a property of an accused person closely associated with one of the MLAs, despite having a court warrant," the officer told PTI.

Four CID officers  an inspector, an ASI and two SIs -- were detained and restrained from conducting searches at the accused's residence under South Campus Police Station area in New Delhi in spite of having a court warrant, he said.

The Delhi Police, which functions under the central government, later said it had provided all assistance to the CID team before it found certain "legal discrepancies" in the execution of the search warrant.

... Legal opinion was sought which revealed that the warrant is not executable. Hence, the same was conveyed to WB Police," Deputy Commissioner of Police (Southwest) Manoj C was quoted as saying in a statement.

The West Bengal government has sent a team of three senior officers to the national capital to resolve the matter, an official of the state's Home Department said.

On the detention of the police personnel in Assam, the CID officer said talks are underway with authorities in the BJP-ruled northeastern state.

Meanwhile, a senior officer of Guwahati Police told PTI that it had extended full cooperation to its counterparts from the neighbouring state in the investigation.

"The rumour that we have detained them is completely wrong. In fact, they are moved around in the city in the vehicle provided by us," he said.

The Congress, which is a part of the JMM-led government in Jharkhand, has alleged that the BJP was trying to topple the Hemant Soren government by offering Rs 10 crore each and a ministerial berth to the MLAs.

The BJP, however, rejected the allegations, claiming that the Congress was trying to hide its own corruption.