The TMC Birbhum district president, was presiding over a meeting in Aushgram assembly constituency on Sunday when purported video was shot. 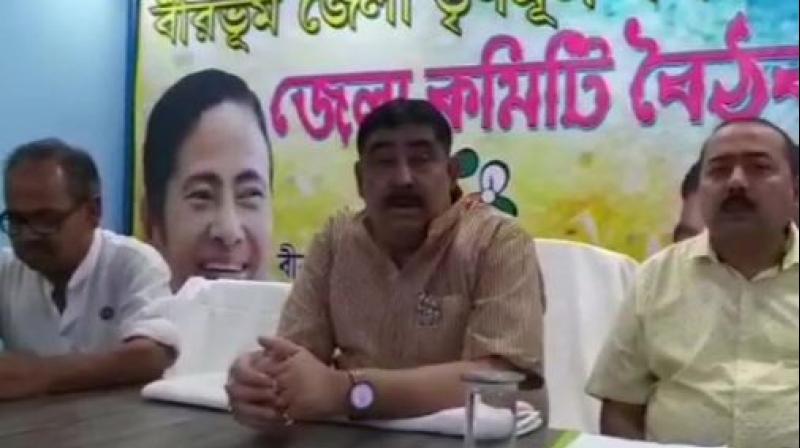 Kolkata: Senior Trinamool Congress leader Anubrata Mandal courted controversy yet again as he was caught on camera purportedly instructing his party workers to get a party rebel and a woman BJP leader arrested on a false case of possessing cannabis.

Anubrat Mandal, the Trinamool Congress (TMC) Birbhum district president, was presiding over a meeting in the Aushgram assembly constituency in neighbouring Burdwan East district on Sunday when the purported video was shot.

He is the party's observer in three assembly constituencies - Mangalkot, Ausgram and Ketugram - in East Burdwan district.

Under the anti-narcotics law, a minimum jail term of six months is awarded for possessing up to 1 kg of cannabis, while the punishment for possessing a larger quantity could lead to prison term of up to 20 years.

"Arrest the man whom we have excluded from the five-member committee. Also, that woman, that plump one. What's her name? The one owning a garment shop, get her arrested too. She is a BJP worker. Can you control them? Tell me if you can control them, otherwise we will arrest them in a cannabis case and put them behind bars," Anubrat Mandal was purported heard instructing party workers in the video clip.

The five-man committee, which was mentioned in the clip, is the one formed by the district unit of the Trinamool Congress to look after the development work in the constituency.

Reacting to Anubrat Mandal's threat, Sangita Chakraborty, a BJP leader in Aushgram, said the video clip proves how the TMC uses police to settle the score with political opponents.

"This is how political opponents are being put behind bars in the TMC regime. What do they mean by cannabis case? Does that mean all the cannabis cases against politicians of opponent parties are false and fabricated?" she questioned.

Asked for his reaction to Anubrat Mandal's assertion, TMC secretary general Partha Chatterjee said he had not seen the video and so he could not comment on it.

The vice-president of the TMC's Birbhum district, Avijit Sinha, said the video had been "fabricated" to malign Mondal and the party. "We feel that the video that has gone viral is a fabricated one. It has been done to malign the party," Sinha said.

Anubrat Mandal had courted controversy in July 2013 when he asked his supporters at a public meeting in Birbhum to hurl bombs at the police and burn down houses of rebel TMC candidates in panchayat elections.

Ahead of the 2016 assembly election in the district, the Election Commission had taken note of his controversial comments and put him under 24-hour surveillance.

The BJP and the CPI(M) said the video was an example of how police were being used by the TMC to stifle dissent in the state. "We have been saying this (using the police) for a long time and now this video has proved how police are being used to attack us. The people of the state will give a befitting reply," BJP state president Dilip Ghosh said.

The TMC had won all the 42 district council seats in Birbhum in the May rural polls in West Bengal without any contest.