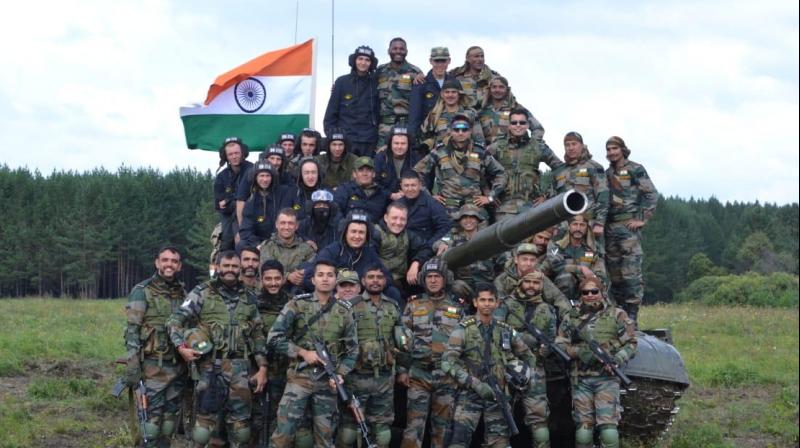 Two recent major joint military exercises highlighted the great demand by many countries for training with India’s armed forces. Whi-le the first was mainly for military interoperability, the second was the result of a political alliance.

On 24 July 2018, a squad of six Indian Air Force aircraft comprising four Su-30 MKI, one C-130 and one C-17, landed at the Royal Australian Air Force (RAAF) Base, Darwin, Australia to participate for the first time in a multinational air exercise with RAAF and the air forces of many other nations. Held from 27 July to 17 August 2018, this exercise involved over 100 aircraft from around the globe and provided a unique opportunity to India’s air-warriors to operate in a dynamic warlike environment.

Exercise Pitch Black is a biennial three-week multi-national large force employment exercise conducted from RAAF Bases at Darwin and Tindal. Exer-cises like Pitch Black are pivotal to ensuring that the Air Force remains ready to respond whenever the Aus-tralian government requi-res. The training and integration of forces that occurs during this exercise directly supports Air Forc-e’s ability to conduct operations.

Exercise Pitch Black features a range of realistic, simulated threats, which can be found in a modern battle-space environment and is an opportunity to test and improve our force integration, utilising one of the largest training airspace areas in the world — Bradshaw Field Training Area and Delamere Air Weapons Range.

The exercise hosts up to 4000 personnel and up to 140 aircraft from around the globe including participants from Australia, Can-ada, France (New Caled-onia), Germany, Indonesia, Netherlands, New Zealand, Singapore, Thailand, Ind-ia, Malaysia and the Unit-ed States and will include day and night flying.

Activities such as Exe-rcise Pitch Black recognise the strong relationship Australia has with its participant nations and the high value it places on regional security and fostering closer ties throughout the Asia Pacific region.

While both Commonwea-lth countries, India and Australia have enjoyed amicable bilateral relatio-ns, the Air Forces of both participated together in the Second World War. The contribution of the armed forces of both these nat-ions has been well documented and acknowledged by historians.

Flying across the ocean to once again demonstrate the strategic reach and professionalism of IAF, such exercises also become an important part of military diplomacy and reassure India’s neighbours of its commitment to regional peace and security. En-route to Australia, the IAF also engaged with the Indonesian and Malaysian Air Forces.

After the success of the recently concluded Exer-cise Gaganshakti-2018, IAF engagement with Indone-sian and Malayasian Air Forces and participation in the Exercise Pitch Black-18 in Australia, IAF once again showcased its capability to be an effective net security provider in the region. Navigating across the ocean, precise air-to-air engagement with tanker aircraft and ability to operate over the international airspace, reaffirmed the IAF’s cutting edge and India’s military capability.

Although short of the desired strength of aircraft, the IAF undertakes many such commitments as they keep it honed for quick response and its adaptability to effectively inter-operate with foreign air forces.

As part of Shanghai Cooperation Organization (SCO) initiatives, SCO Pea-ce Mission Exercise is conducted biennially for SCO member states. The fifth edition of the joint exercise for the year 2018 was conducted by Central Mili-tary Commission of Russ-ia from 22 August to 29 August 2018 at Chebarkul, Chelyabinsk, Russia. This was a historic occasion due to the maiden participation of India post beco-ming a full member of the SCO in June 2017 and marks a major milestone in the multilateral relations of SCO member nati-ons. The exercise involved tactical level operations in an international counter insurgency/counter terrorism environment under SCO Charter.

The Indian contingent of 200 personnel was primarily composed of troops fro-m infantry and affiliated arms and services, along with Indian Air Force. The Russian Army, the major participant, fielded 1700 personnel followed by the Chinese contingent of 700 People’s Liberation Army (PLA) personnel.

With the entire exercise contingent reaching the exercise location at Cheb-arkul, Russia on 14 August, the initial days were util-ised for operational orientation with the exercise setting and terrain. The staff phase of the exercise was conducted from 22 to 28 August 2018 in which Indian contingent established a Joint Staff Head-quarters and conducted a staff exercise prior to the evolution of a joint operational plan.

The senior officials ex-pressed great satisfaction with the high standards achieved in the exercise. The formal parade by military contingents was performed at the camp location of Combined Arms Range in Chebarkul.

The exercise provided an opportunity to the armed forces of SCO nations to train in counter terrorism operations in an urban scenario in a multi-national and joint environment. The scope of the exercise included professional inte-raction, mutual understan-ding of drills and procedures, establishment of joint command and control structures and elimination of terrorist threat in urban counter terrorist scenario.

The SCO Peace Mission Exercise is expected to contribute in developing mutual understanding and respect amongst SCO member nations in future. However, as far as Sino-Indian relations are conce-rned, despite India’s recen-tly raised status in the SCO, the “informal summit” at Wuhan between Indian Prime Minister Narendra Modi and Chine-se President Xi Jinping and the extensive discussi-ons between China’s State Councilor and Defence minister Gen. Wei Fenghe and Indian Defence minister Nirmala Sitharaman, there is no indication so far of any let-up in transgressions/incursions by PLA across the long and  disputed Line of Actual Control between the two nations.

On  18 July 2018, minister of state for defence Dr. Subhash Bhamre in a written reply in Parliament gave details of joint military exercises conducted with foreign countries during the last three years and the current year.

The only irony here is that all these exercises are undertaken by the three services, all of which face shortages of personnel, arms and equipment and have major national security operational commitments.