Eastern Command sources revealed that three Army columns have been put on standby. 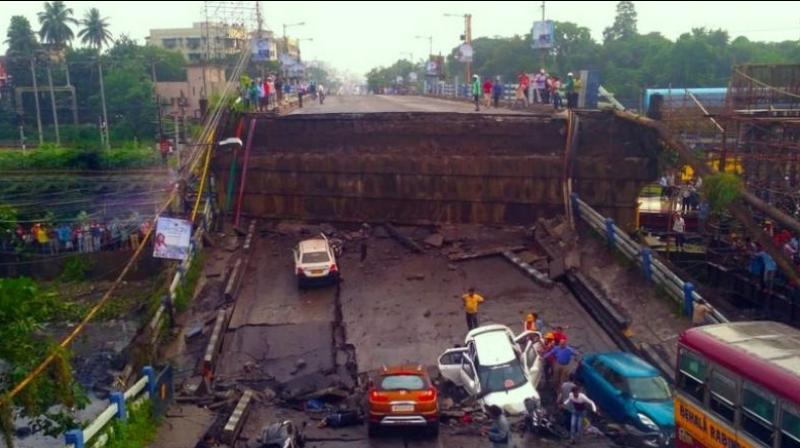 Kolkata: A portion of Majerhat Bridge, connecting Chetla with New Alipore, at Taratola in south Kolkata collapsed on Tuesday afternoon. At least five people are feared to have been killed and several trapped under the debris, according to unconfirmed sources.

The death toll is likely to rise.

Eastern Command sources revealed that three Army columns have been put on standby.

The bridge, which passes above the railway tracks, collapsed around 4:30 pm and vehicles crashed on the slums located next to the bridge.

Soon after the incident, Kolkata Police commissioner Rajeev Kumar and other officers were rushed to the spot. Kolkata Mayor and Fire and Emergency Services minister Sovan Chatterjee also rushed to the site.

Four NDRF teams along with fire brigade personnel were pressed in the rescue operations.

The fire brigade and disaster management group personnel were pressed in the rescue operations.

A fire official said that nearly 20 people were rescued.

Till the reports last came in, nine persons have been admitted to SSKM Hospital which is the nearest to the spot.

A survivor, Sisir Chakraborty, recalled, "I was travelling in my car. I was reading a magazine. Suddenly I felt a massive jerk before finding a long queue of cars ahead of mine."

He added, "People were running away in panic. Some of them said the bridge has collapsed. What I realised was that a block of the bridge which is above a slum caved in."

West Bengal Chief Minister Mamata Banerjee, who is in Darjeeling, said, "Although I am here, my heart is there. None of us wants to stay here anymore. But there is no flight available now. Moreover, it takes around 4 hours to reach Siliguri."

The mishap comes two years after the collapse of an under-construction Vivekananda Flyover in north Kolkata which claimed over two dozen lives.