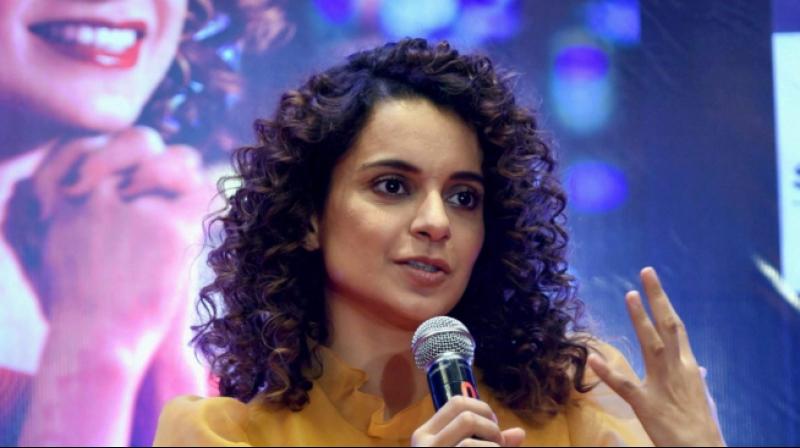 Mumbai: Leaders of the ruling coalition in Maharashtra lashed out at actor Kangana Ranaut on Friday for comparing Mumbai to Pak-occupied-Kashmir, with home minister Anil Deshmukh saying that those who feel unsafe in the city have no right to live here.

The opposition BJP distanced itself from the Bollywood actor, saying it had nothing to do with her.

In a tweet, Ranaut had recently asked "why is Mumbai feeling like Pakistan-occupied-Kashmir?" and tagged a report where Raut had purportedly said she should not come back to Mumbai if she was afraid of the city police.

"If people who have nothing to do with the city malign it and its police, the state government and the home minister...should take action, or else the morale of the police will take a beating," the Sena leader told reporters on Friday, alleging a conspiracy behind the campaign against Mumbai Police.

"The state health department and the home department should deal with mental cases which are on rise," he added.

Raut also said the political parties which got votes in Mumbai "should be ashamed of supporting the elements who defame the Mumbai police".

"What is PoK? Kangana should tour that place first and see the situation prevailing there," he said.

Mumbai Police have been often compared to the famed Scotland Yard because of their efficiency, Deshmukh said, adding that it was ridiculous for an actor to make such a statement.

City BJP leader Ashish Shelar distanced his party from Ranaut's comments. "Kangana should not try to teach Mumbai, Mumbaikars and Maharashtra....BJP has nothing to do with Kangana. Don't link us to her statements," he said.

State Congress spokesperson Sachin Sawant accused Ranaut of being hand in glove with the BJPto malign the Sena-NCP-Congress government and the Mumbai police.

"By equatingMumbai to PoK, the actress has insulted 13 crore Maharashtrians...and all those who love Mumbai, at the behest of BJP," Sawant alleged in a tweet.

"We demand an unconditional apology from Devendra Fadnavis and the state BJP for their support to Kangana and party MLA Ram Kadam," the Congress leader said.

Kadam, a local MLA, said the BJP did not support any objectionable comment made by Ranaut.

"She is ready to expose big names in politics and film industry involved in drugs. Is the state government scared of this? The Mumbai police is being maligned to protect some big names," he said.

Earlier, Kadam had demanded that the state government provide security to Ranaut. However, the actor had said that she was more scared of the Mumbai police.