Deputy CM Nirmal Singh said that the militants were just frustrated because of successful operations carried out by the security forces. 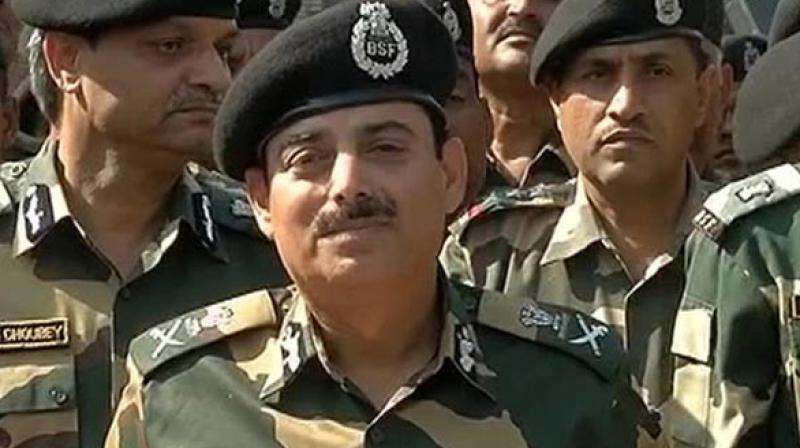 Praising BSF personnel for averting a tragedy, Sharma said that a serious attack was averted by the soldiers. (Photo: ANI)

He said, “As long as our ‘friendly neighbour’ does not behave, I think we will expect to have many more attacks,” he told reporters here after participating in the wreath laying ceremony for BSF ASI BK Yadav who was killed in Tuesday’s fidayeen attack on a BSF camp near Srinagar Airport.

Sharma said that it was a serious attack “which was averted by our boys.”

He said that the militants after storming the camp of the BSF’s 182 Battalion at Humhama in central district of Budgam started targeting arms and ammunition stored there.

“Our brave boys foiled the militant plan to enter the room where weapons were kept. But unfortunately the ASI who was present in his room was shot dead by a militant. The others neutralized him and others within quickest possible time. A serious attack as averted which is an example of the BSF’s discipline, training and bravery,” he said.

Replying to questions, he said that fidayeen or suicide squads of militants would continue to sneak in Jammu and Kashmir and such attacks may continue to happen but what was important was how to respond to such terror acts and neutralize the attackers without collateral damage and without the security forces suffering casualties.

They were joined by Deputy Chief Minister Nirmal Singh and Minister for Education Altaf Bukhari in paying tribute to the valour of the slain ASI.

Singh said that the militants were just frustrated because of successful operations carried out by the security forces. He also condemned the killing of civilians and policemen by militants.

Meanwhile, Bihar Chief Minister Nitish Kumar Wednesday announced Rs 11 lakh ex-gratia to the next of kin of the slain ASI who was a native of Kamalchak village in Bihar's Bhagalpur district.

The Chief Minister also announced that the last rites would be performed with state honour. Expressing grief, Kumar said that “the country would always remember Yadav’s bravery.”