On September 29, a massive crowd of morning rush hour commuters had stampeded on the stairwell of a narrow foot overbridge leaving 23 dead. 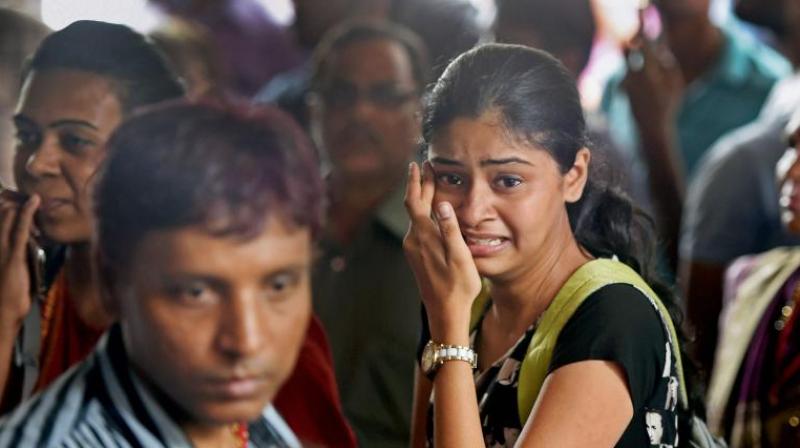 The Western Railway on Tuesday launched an inquiry into the circumstances leading to the stampede on the overbridge, where vendors selling their flowers and other products are a common sight. (Photo: PTI/File)

Mumbai: As the railways investigates the Elphinstone Road station stampede, a student survivor has told the inquiry panel that a flower vendor's cry of "phool gir gaya (flowers have fallen)" being mistaken as "pul gir gaya (the bridge has fallen)" might have set off the panic.

However, a senior railway official said they were yet to ascertain if this was the sole cause of the mishap.

On September 29, a massive crowd of morning rush hour commuters had stampeded on the stairwell of a narrow foot overbridge (FOB) at the station, leaving 23 dead and more than 30 injured.

The Western Railway on Tuesday launched an inquiry into the circumstances leading to the stampede on the overbridge, where vendors selling their flowers and other products are a common sight.

"A woman injured in the stampede told the inquiry panel yesterday that a flower vendor uttered the words 'phool gir gaya', which others mistook for 'pul gir gaya," a senior Western Railway official today said.

She told the inquiry panel that this set off panic among the crowd of people on the stair and they started running, trampling one another, Western Railway's chief spokesperson Ravindra Bhakar said.

The 19-year-old woman, who was going to Vile Parle for her coaching classes, got stuck on staircase. She survived the stampede with some injuries and admitted to the KEM hospital in Parel and later discharged, he said.

Bhakar, however, said it was too early to conclude that this was the sole reason for the tragedy. "We will try to get detailed accounts of other injured passengers, locals who rescued them and witnesses as a part of our in-depth inquiry."

He also said the panel will ascertain if the stampede occurred after some rumours were spread.

Quoting the woman, another railway official said, "After people mistook the word 'phool' for 'pul', they panicked and jostled with other to reach the top of the FOB. A few passengers had fallen on the woman but she managed to rescue herself and come out of the bridge."

However, some other survivors had claimed that a short circuit led to a panic among the people crammed on the narrow bridge which resulted in the stampede.

A senior Western Railway official earlier said they have already put out advertisements appealing to people to come forward to share information on the stampede.

The statements of two seriously injured passengers were recorded yesterday, he said.

If other injured passengers find it difficult to visit the office set up by the railways for the purpose, teams would visit them to record their statements, he had said.