The CBI told a bench headed by Chief Justice Dipak Misra that there was a need to issue a look out circular (LoC) against Karti. 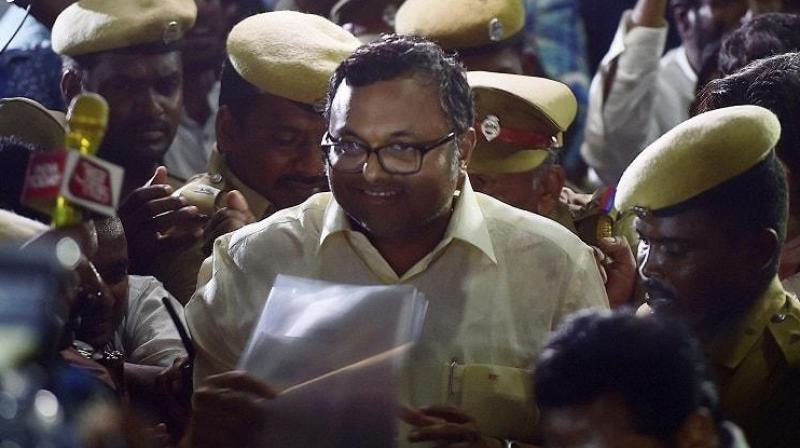 The CBI FIR, lodged on May 15, had alleged irregularities in Foreign Investment Promotion Board (FIPB) clearance to INX Media for receiving overseas funds to the tune of Rs 305 crore in 2007 when Karti's father was the Union finance minister. (Photo: PTI/File)

New Delhi: Karti Chidambaram, son of former Union minister P Chidambaram, had "tampered" with evidence relating to an alleged graft case against him during his visits abroad in the months of May, June and July this year, the CBI alleged in the Supreme Court on Wednesday.

The Central Bureau of Investigation (CBI) told a bench headed by Chief Justice Dipak Misra that there was a need to issue a look out circular (LoC) against Karti as he had the "potential" to tamper with the evidence and he had done this during his visits abroad.

The CBI FIR, lodged on May 15, had alleged irregularities in Foreign Investment Promotion Board (FIPB) clearance to INX Media for receiving overseas funds to the tune of Rs 305 crore in 2007 when Karti's father was the Union finance minister.

"The LoC has two purposes. First, considering the investigation, he (Karti) may not become an outlaw and second, he can tamper with the evidence outside India," Additional Solicitor General Tushar Mehta, appearing for CBI, told the bench.

He said there were "contemporaneous official records" which reflected this.

"These are not statements under section 161 of CrPC which can be obtained by pressurising somebody. These are contemporaneous official records," Mehta told the court.

He also sought to place before the bench some documents in a sealed cover, which was objected to by senior advocate Kapil Sibal, who was representing Karti.

Sibal also questioned the way in which CBI was seeking to place on record certain documents in a sealed cover, after Mehta referred to legal provisions and said these empowered the probe agency to share case diary with the court without sharing them with the accused.

Meanwhile, Mehta told the apex court that he would seek instructions on whether the division bench of the Madras High Court be asked to decide the main matter pending there.

The court posted the matter for further hearing on October 9.

CBI had last month told the apex court that Karti was prevented from travelling abroad as he was allegedly closing several of his foreign bank accounts. The CBI's contention was strongly refuted by Karti's counsel.

On September 1, the CBI had told the top court that there were "good, cogent" reasons for issuing the LoC against Karti.

On August 18, the court had asked Karti to appear before the investigating officer at the CBI headquarters in Delhi for questioning in the case. Before this, the apex court had said that Karti would not be allowed to leave India without subjecting himself to investigation in the case. The court had then stayed the high court order putting on hold the LOC against Karti.

The CBI had claimed that the FDI proposal of the media house, cleared by Chidambaram, was "fallacious".

The FIR was registered on May 15 before the special CBI judge in Delhi and the registration of the case was followed by searches at the residences and offices of Karti and his friends the very next day.