Talking to his supporters Yogi said that this yatra was a mirror for communist governments in Kerala, West Bengal and Tripura. 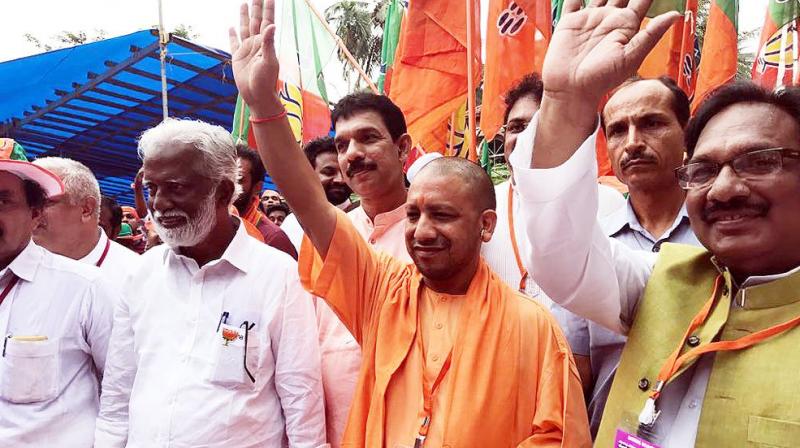 Uttar Pradesh Chief Minister Yogi Adityanath, on Wednesday, joined the Jana Raksha Yatra in Kannur over the killing of BJP and RSS workers in the state. (Photo: Twitter/Yogi Adityanath)

Kannur (Kerala): Uttar Pradesh Chief Minister Yogi Adityanath, on Wednesday, joined the Jana Raksha Yatra in Kannur over the killing of BJP and RSS workers in the state.

Talking to his supporters, Yogi said, "This yatra is a mirror for communist governments in Kerala, West Bengal and Tripura. They should put an end to political killings".

"There is no place for violence in a democracy, but political killings are continuing here," he said.

On Tuesday, BJP chief Amit Shah set off on a 15-day foot march to protest the CPI-M's alleged violence against workers of his party, which is trying to emerge as the main challenger to the Left in Kerala.

Addressing a rally in the CPI(M) bastion, also the home town of Kerala Chief Minister, Shah said Vijayan was responsible for the violence in the state.

The BJP chief met the family members of RSS-BJP workers killed in the political violence in the state and also inaugurated an exhibition organised in their memory.

Seeking to corner the ruling alliance and boost the BJP's standing among the masses, the party has asked its senior leaders, including Uttar Pradesh Chief Minister Yogi Adityanth and several Union ministers, to join the exercise.

With the Congress, the main opposition party in the state, and the Left, maintaining a coordination against the BJP in politics at the national level, the saffron party believes that it can occupy the opposition space in Kerala and build on its gains to become a major force by the next Lok Sabha polls.