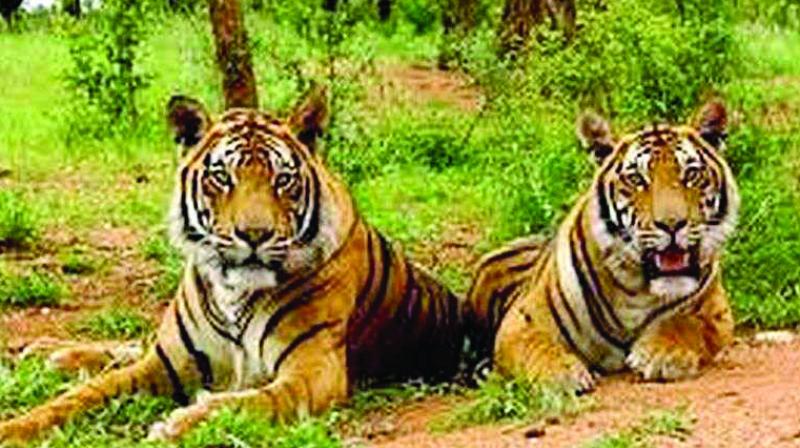 While tiger population has gone up in most Indian states, in Odisha, it has come down or remained static.

Bhubaneswar: For Odisha’s fast dwindling wildlife, life continues to be stressful, fraught with risks, a daily struggle for food in a fast depleting habitat. In the last nine years and six months (since April,2010), 727 elephants have died of which, 257 elephants (more than 35 per cent,) have died due to unnatural causes – 113 to electrocution, 77 to poaching, 26 to poisoning, 26 to train accidents, five to road accidents and 10 after falling into manmade structures like open wells and irrigation projects.

The reasons for death could not be ascertained in 147 cases as carcasses are found in decomposed state and some just skeletal remains.

While tiger population has gone up in most Indian states, in Odisha, it has come down or remained static. In 2004, the state had claimed the presence of 192 tigers which came down to 28 in 2014.

“Even after spending crores of rupees on tiger conservation during the last four years, the numbers continued to be stagnant at 28 in 2018 census. Similipal, which houses most of the tigers, witnesses rampant poaching of herbivores, the tiger’s food due to utter failure of the Similipal authorities to control poaching,” a report of Wildlife Society of Odisha, a non-governmental wildlife watchdog, said on Thursday.

Satkosia witnessed an ill advised venture into tiger tourism in June,2018, which went horribly wrong within two months as one of the two tiger’s relocated from Madhya Pradesh was poached and the other had to be caught and brought back into an enclosure after she attacked humans.

“Leopards are being regularly poached for their skins and body parts. This is evident from the fact that 11 leopard skins have been seized in Odisha in the last one and a half years and as many as 26 men have been arrested, most of them in operations carried out by the crime branch of police. The biggest seizure happened In Kuchinda, Sambalpur on March 15, 2019, when four leopard skins were seized by the crime branch and seven poachers/traders were arrested. The forest department was clueless about 7 of the 11 skins seized and has failed to identify the source of skins and where they were poached,” Dr Biswajit Mohanty, secretary of Wildlife Society, said.

Dr Mohanty, while sharing details on the Olive Ridely sea turtle, said, this Odisha’s sports mascot continues to be massacred in thousands by illegal trawlers.

He also claimed that Pangolin, the most trafficked wild animal in the world, was rampantly poached in the last 15 months.

“This is evident from the several seizures of Pangolin Scales and Live Pangolins. On June 18, 2018, when Shamsuddin Khan was caught with 5 kilogram of Pangolin scales near Daspalla, Nayagarh, it was not known to the forest department that he was one of the most wanted wildlife smuggler in the state until the crime branch took over the case. His arrest led to five more arrests, including two from the North East and exposed a network that covered several states in India on to South East Asia. The high demand for Live pangolins was evident in last one year, when eight Live Pangolins were seized and reports of several more, that got smuggled out, have come to light,” added Dr Mohanty.