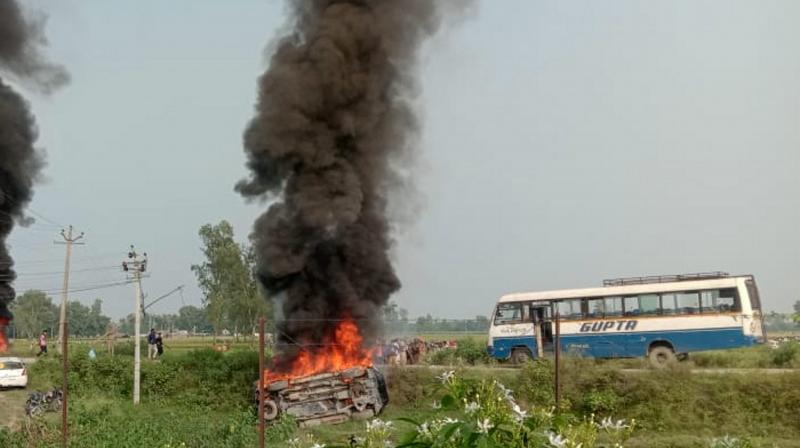 A vehicle set ablaze after violence broke out after farmers agitating were allegedly run over by a vehicle in the convoy of a union minister, in Lakhimpur Kheri. (Photo: PTI)

Lucknow: The Uttar Pradesh government on Monday announced an ex-gratia of Rs 45 lakh and a government job for the kin of four farmers who died in the Lakhimpur Kheri incident yesterday.

The state government has also announced that a retired High Court judge would probe the issue.

Additional Director General (Law and Order) of Uttar Pradesh police Prashant Kumar said: "Government will give Rs 45 lakhs and a government job to the families of four farmers who died in Lakhimpur Kheri yesterday. The injured will be given Rs 10 lakhs. FIR will be registered based on farmers' complaints. Retired High Court judge will probe the matter."

The ADG also informed that no leader of any political party will be allowed to visit the district because Section 144 of CrPC is in place.

However, the members of farmer unions are allowed to visit the district.

As many as eight people died in the Lakhimpur Kheri incident on Sunday, said police.

However, Ashish Mishra refuted SKM's allegations and said he was not present at the spot where the incident took place.