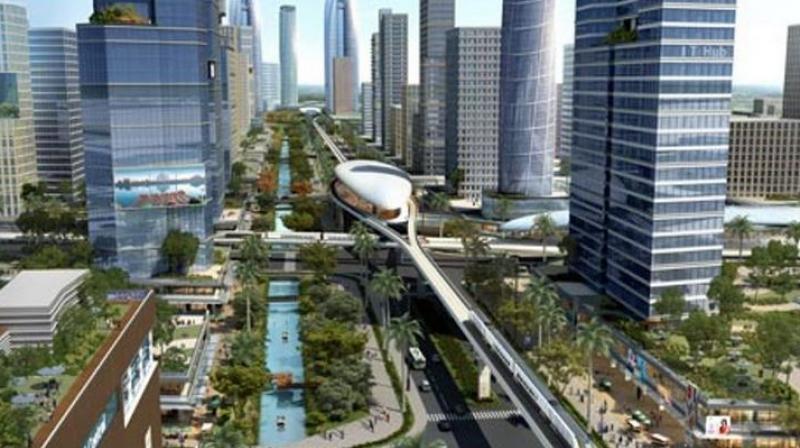 Amaravati: The omission of Amaravati as Andhra Pradesh’s capital from India’s new map has triggered a war of words between the ruling YSR Congress Party and opposition Telugu Desam Party.

On Saturday, India’s map was released by Union Home Ministry to depict the newly created Union Territories (UTs) --- Jammu and Kashmir and Ladakh. The map mentioned the capital cities of all the states except Andhra Pradesh. It depicted Hyderabad as the joint capital of Telangana as well as Andhra Pradesh.

According to a Hindustan Times report, TDP spokesman Varla Ramaiah said that the omission clearly showed that chief minister Jaganmohan Reddy’s government decided to relocate the capital city from Amaravati to some other location.

Ramaiah said that they suspect that Reddy has indicated to the Centre about his plans. “That could be the reason why Amaravati was not mentioned in the revised map,” he added.

“…the Prime Minister himself laid the foundation stone for the capital. For the last five years, all the official correspondence from the centre and other states with Andhra Pradesh clearly acknowledges Amaravati as the capital,” Ramaiah said.

YSRCP lawmaker Alla Ramakrishna Reddy said it was unfortunate that Andhra Pradesh has figured on the map without any capital city and blamed the previous N Chandrababu Naidu-led TDP government for it.

Alla said that except for a few temporary structures, Naidu did not develop a single permanent structure in the capital city. “What is worse, his government had not even issued a gazette notification declaring Amaravati as the capital city,” the lawmaker said.

Andhra Pradesh minister Botsa Satyanarayana said that Amaravati, which is located on the banks of river Krishna and prone to flooding, was not fit for being the state’s capital. The TDP, however, has maintained that the gazette notification is just a technical issue.

Amaravati as Andhra Pradesh’s capital was Naidu’s idea and dream project. Jaganmohan Reddy, who replaced him as chief minister in May, called the land acquisition for the new capital a scam and cut funds for its development. After he took office, Reddy demolished Rs 9-crore conference hall Naidu had built in Amaravati.

In September, the state government named retired bureaucrat G N Rao as the head of an expert committee to work out a strategy for urban planning and the relocation of the capital city. Last week, the committee called for suggestions from the people on the issue before November 12.