The odd-even scheme will be applicable in Delhi from Nov. 4 to Nov. 15 from 8 am to 8 pm, except on Sundays. 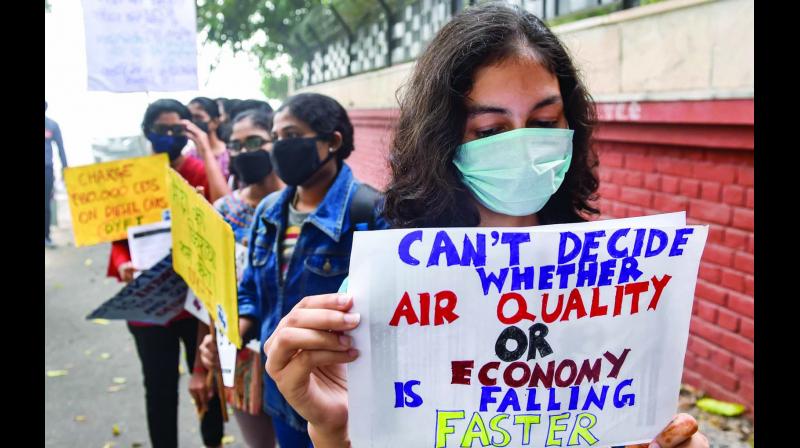 People wear masks during a protest in New Delhi on Sunday, demanding the implementation of measures to reduce air pollution. (Photo: PTI)

New Delhi: A week after Diwali, pollution levels in Delhi-NCR region and nearby areas shot up again on Sunday morning, with the air quality bordering on the “severe plus” category at several places. Pollution also led to a major disruption at Delhi airport as 37 flights were diverted to other airports due to heavy smog. At one point, the city’s Air Quality Index shot up to 625 at around 10 am, the highest this year.

In order to bring down he pollution levels, the AAP government is implementing the third edition of the 12-day “odd-even” car rationing scheme in Delhi from Monday. That means odd-numbered vehicles will be allowed on Delhi’s roads on odd dates and  even-numbered vehicles will be allowed on even dates till November 15. The scheme will not be implemented on Sunday, November 10, and the restrictions will also apply to the vehicles with the registration numbers of other states.

Like previous editions, all women and two-wheelers, which form the bulk of all vehicles in Delhi, will be exempt from the scheme. Also, e-vehicles will be exempted.

CNG-run private vehicles too have been kept outside the exemption list.

Cars with children in school uniform  and those involved in medical emergencies have also been exempted. Asked how law enforcement agencies will deal with parents coming back after dropping children or going to pick them up in the afternoon, a senior official said: “They will be let off only on the basis of trust.”  He said cars driven or occupied by differently-abled people have also been exempted.

With farmers still defying the ban on stubble burning in the neighbouring states, a blanket of haze which has engulfed Punjab and Haryana has also extended to Delhi. The city’s air quality is likely to stay “severe” due to calm winds, that are unfavourable for the dispersion of pollutants, according to government air quality monitor Safar.

A slight increase in the windspeed and a light drizzle on Saturday had led to a drop in pollution levels, with the air quality index settling at 399 in the evening. Weather experts, however, said pollution levels shot up overnight due to calm winds, leading to the accumulation of pollutants.

In an impassioned plea on Facebook, chief minister Arvind  Kejriwal said the issue of pollution should not be “politicised” and called on all neighbouring states and the Centre to “sit together” and deliberate on how to prevent stubble burning as the air quality in the national capital dipped to alarming levels. He said his government was not indulging in a “blame game” but looking for solutions to pollution caused by the stubble burning. “We don’t want to do that (play blame games)... it is about our health... our kids... our future... what would we get if we played blame games?” The Air Quality Index in Delhi went deep into the “emergency” zone on Sunday morning with the city recording an overall Air Quality Index of 625 — the highest this year — at around 10 am.”

“We are just saying... what is the disease? The disease is that air polluted by crop burning comes into Delhi and we have to stop it. We don’t want to blame anyone. We are saying we need to come together to stop this. There should be no politics on this.”

Mr Kejriwal also questioned the pace at which the Centre was distributing straw management machines to farmers to stop stubble burning. “Till now 63,000 machines have been made available to farmers in Punjab and Haryana. There are 27 lakh farmers in these states. How long would it take to distribute these machines to all these farmers. For how long do we have to bear this pollution?”