Stalin said that the state government should conduct an investigation and arrest the miscreants. 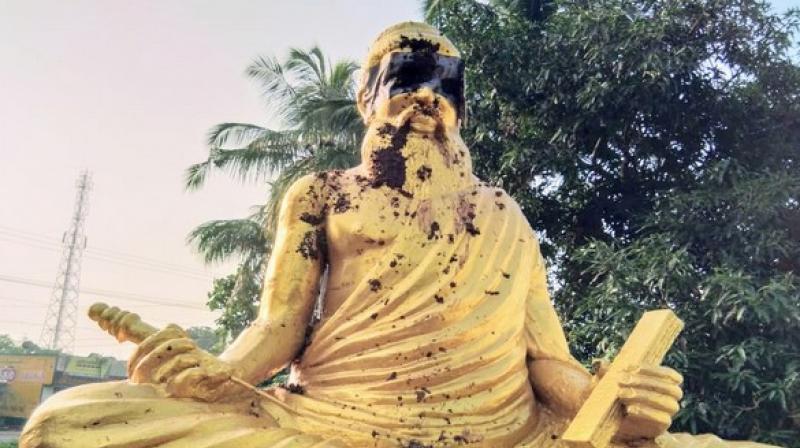 Thanjavur: Miscreants desecrated a statue of Tamil poet and philosopher Thiruvalluvar near Thanjavur in the early hours of Monday.

The statue, located in front of the panchayat office at Pillaiyarpatti, was found blackened with the cow dung and blindfolded with a black cloth, the Times of India reported.

The passerby noticed the desecrated statue and informed the Tamil University police who rushed to the spot and cleaned the statue. The police registered a case and also launched an inquiry into the matter.  Police protection has been increased around the statue.

Meanwhile, a large number of people led by Thiruvaiyaru MLA Durai Chandrasekaran and Thankavur MLA TKG Neelamegam stage a protest demanding arrest of those who were indulged in the vandalism.

A group of women and a section of Tamil University students also took out a rally condemning the incident.

"This happened to the statue after BJP released on social media a photo of Thiruvalluvar wearing a saffron cloth. Thus, people suspect BJP’s role in the desecration of the statue,'' Stalin said while talking to reporters in Kolathur.

He further said that the state government should conduct an investigation and arrest the miscreants.

Later, he tweeted, "Earlier Periyar statue was desecrated and now Thiruvalluvar. All those who have strived for the sake of Tamil language are being shamed continuously in the state. The AIADMK government which has police in its hands must be ashamed of itself."

Earlier, a controversy broke out between political parties in Tamil Nadu, when the state BJP posted a tweet which contained a picture of Thiruvalluvar wearing saffron cloth while holding a 'rudraksha' string in his hand and white holy ash spread on his forehead.

The opposition parties condemned the tweet, calling it an attempt to allegedly 'saffronise' Thiruvalluvar.