India   All India  04 Nov 2020  Onions thrown at Bihar CM Nitish Kumar by protestors during a public meeting in Madhubani
India, All India 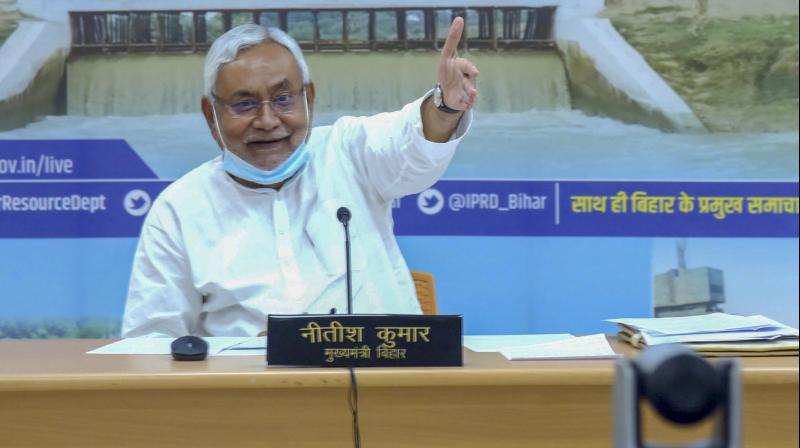 Patna : Onions were thrown at Bihar chief minister Nitish Kumar by some protestors while he was addressing a public meeting in Madhubani which goes to polls in the third phase of Assembly elections on November 7.

Mr Kumar was talking about the state’s development and the employment issue when onions and stones came flying at him at the rally in support of his party nominee Sudhanshu Shekhar at Gangaur village ground in Harlakhi Assembly constituency. The onions thrown from a distance fell before reaching the stage.

According to reports from Madhubani, a group of youth present at the rally got angry with Mr Kumar's comments and started throwing onions and stones at him. This is probably the first time that stones and onions were thrown at Bihar CM during an election campaign.

"Khub feko, khub feko, khube feko (keep throwing)… You can keep throwing stones at me. But I ask you to beware of such people who have been promising 10 Lakh jobs as they don’t know anything about governance. I can tell you that they have no knowledge about the ABC of governance and cannot do anything. I also ask you not to indulge in all these anti-social activities otherwise nobody will be able to save you,” Mr Kumar told the protestors and urged the security men not to pay attention to them.

At many places a section of the crowd disrupted his speech, at which Mr Kumar lost his cool and chided them for acting on behalf of his “political rivals" and telling them that nobody is bothered even if they don’t vote for him.

Later, when his security personal tried to intervene and detain people who were involved in the attack, Bihar CM stopped them and said, “Let them do it. They are being misled by people who have done nothing for the state. I have already told you that I am working hard to create opportunities here so that people don’t go out to other states for work. They got the opportunity for 15 years but they didn’t give any jobs”.

Nitish Kumar, whose party is an ally of the BJP in Bihar, has been facing criticism from the Opposition parties, including LJP chief Chirag Paswan. On Tuesday, Mr Paswan, while talking to reporters, said that “Nitish Kumar will not return as CM of Bihar. I can give you in writing as people are angry with him for not doing anything for the state”.

Criticising the Grand Alliance for the incident, JD(U) leader Sanjay Jha in a statement said, “Everybody is aware how the chief minister worked hard for the development of the state.  Such an incident is not good for the democracy”.

Lakhs of migrant workers have returned to their homes in Bihar during the Covid-19 pandemic. Many of them are unable to return to their previous jobs.

This is not the first instance when Mr Kumar had to face a hostile crowd at his rallies. A slipper was thrown at him by protestors while he was going towards his helicopter after completing his speech at Sakra in Muzaffarpur district on October 26. It missed him.

Mr Kumar lost his cool at an election rally at Parsa in Saran district on October 21 where he had gone to stump for his party candidate Chandrika Roy when a section of the crowd chanted "Lalu Zindabad”. "Do not make such noise here. If you do not want to vote for us, don’t do it," Kumar had told the slogan shouters.