India   All India  04 Dec 2018  My father taught us to be secular, says son of cop killed in Bulandshahr violence
India, All India

My father taught us to be secular, says son of cop killed in Bulandshahr violence

Abhishek Kumar, a class 12 student had just finished writing his exams when he received the unfortunate news of his father's death. 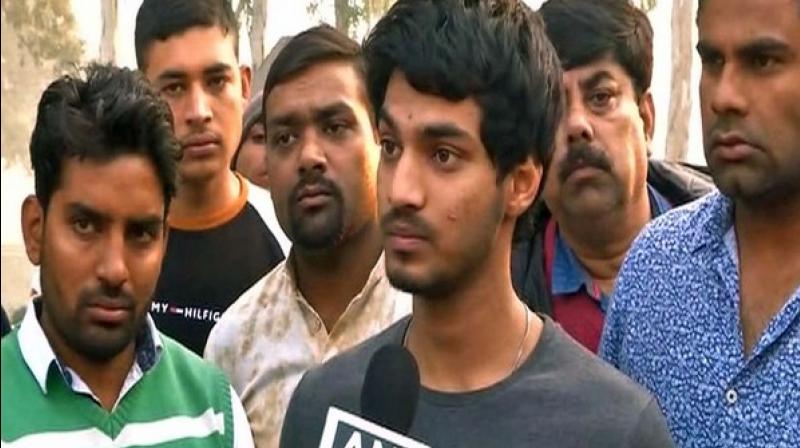 Bulandshahr: Abhishek Kumar son of deceased cop Subodh Kumar who was shot dead yesterday during Bulandshahr clashes, on Tuesday presented a brave face amid the unfortunate loss and asserted that his father always wanted his children to respect all religions.

Abhishek told ANI, "He wanted us to be a good citizen. He wanted us to be a person who doesn't incite violence in the name of religion. Be it Hindu, Muslim, Sikh or Christian everyone is equal over here. It is my father who lost his life this time, who is going to be the next?"

Abhishek Kumar, a class 12 student had just finished writing his exams when he received the unfortunate news of his father's death.

Recalling his last conversation with his father he said, "I had spoken to him one day before the incident. He was telling me to work on my weak subjects and advised me to focus more on the subject in which I received fewer marks during the last examination."

Abhishek also shared turn of events which led to his father's death and said, "There were reports of some stone pelting in the concerned police station area and when my father reached the spot he was hit by a stone on his head. He became unconscious. Later when the constables were taking my father, the police jeep came under attack. The constables went away from the place and my father who was unconscious was shot above the left eye."

Inspector Subodh Kumar and a local youth were killed in Bulandshahr on Monday when a mob went on a rampage over allegations of illegal cow slaughter. He was also the Investigating officer (IO) in the Akhlaq lynching case.

Police have lodged two First Information Reports in Bulandshahr case. One FIR is against the alleged cattle slaughter and the other against the violent protests which followed.