Singh said, 'Sometimes the Chinese Army enters here and sometimes our people go over there.' 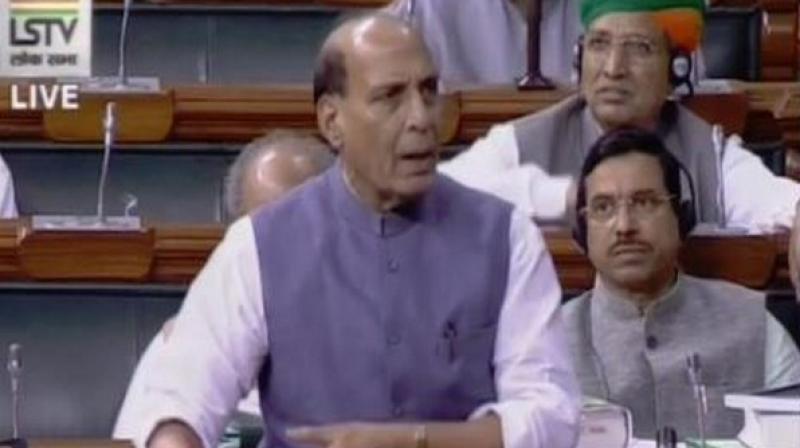 In his reply, the Defence Minister said that the government was developing infrastructure in areas bordering China to ensure India's sovereignty. (Photo: File)

"There is no mutually agreed LAC between India and China. Due to different perceptions of the LAC, sometimes incidents of incursion occur, I accept it," Singh said while replying to a question on incidents of Chinese incursion by Congress leader Adhir Ranjan Chowdhury.

He said, "Sometimes the Chinese Army enters here and sometimes our people go over there."

Congress leader Adhir Ranjan Chowdhury asked, "China has started sending ships up to Andaman & Nicobar. We show aggression in our voice when it comes to Pakistan, then why are we balanced and soft towards China?"

In his reply, the Defence Minister said that the government was developing infrastructure in areas bordering China to ensure India's sovereignty.

"India is developing infrastructure like roads, tunnels, railway lines, and airfields on the China border to ensure the unity, security, and sovereignty of the country," he said, assuring that security forces are fully capable of securing the borders.

He said, "I would like to assure the House that our forces are vigilant and protecting our borders. Our forces are fully capable of facing any challenge, nobody should have a doubt about it."

Singh told Lok Sabha that the defence forces were fully alert and capable of dealing with any challenge to security of the country and there was no need of worry.

He was responding to concerns expressed by Congress leader Adhir Ranjan Chowdhury during zero hour who said India adopts a tough stance against Pakistan for its inimical acts but was relatively soft towards China.

"The infrastructure on India-China border, such as roads, tunnels, airfields and railway lines, is being developed so that the country's unity and integrity are ensured fully. The work is being done at a fast pace," he said.

The minister, who faced interruptions from Congress members, said the two armies have mechanisms in place to prevent escalation in such situations and these include flag meetings and hotline.

Singh said the government was fully alert to the security needs of the country, conducts reviews from time to time and takes requisite steps.