Are Indian women, under siege, ready for gun?

Post-Nirbhaya incident, a special revolver was designed for women, but it remains largely unsold. 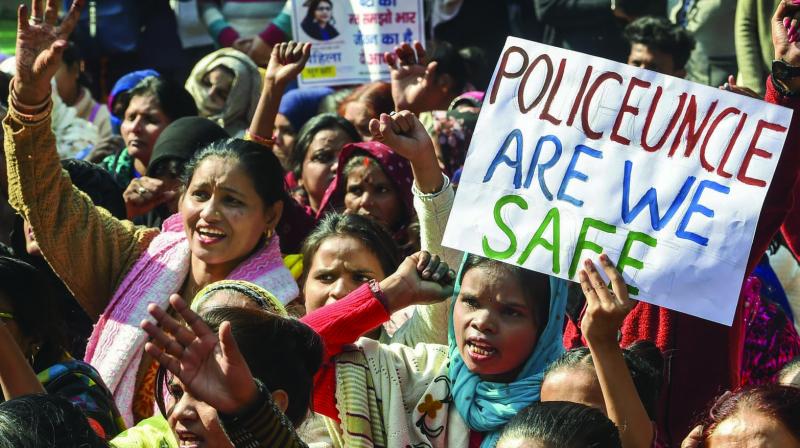 Women shout slogans during a protest of Delhi Commission for Women against the Hyderabad rape-murder case and alleged rise in the number of incidents of crime against women at Jantar Mantar in New Delhi on Tuesday. (Photo: PTI)

After the recent ‘’Disha’’ episode, are Indian women, who often join the chorus for encounters or lynching of sexual offenders, ready to shoot attackers with this handy weapon — provided the government grants gun licenses?

In America with its longstanding and well-entrenched gun-culture, an increasing number of women buy guns for self-protection. In India, however, strict gun licensing laws comes in the way of women buying weapons. This ends up in women relying pepper spray and mobile safety apps for their protection. Or just sheer luck. According to IOF officials, only 53 women from around the country purchased Nirbheek revolvers from the factory soon after it was out in January 2014. Around 1500 have been sold in total.

‘Two years ago, we opened sale for arms dealers who sold in their local markets,” IOF additional general manager, Dinesh Singh, told this newspaper. “Besides whatever was bought individually, there could be some who may have purchased from dealers that we are not aware of.”

About 5,000 revolvers of different makes, including Nirbheek, were purchased by arms dealers in the country in the last five years. Each Nirbheek has a range of up to 15 metres and is made of titanium alloy. It costs a little over `1.39 lakh, so not all women can afford it.

‘’Even the trigger has been reduced for smooth operation,’’ says Singh. Another model, Nishank, out in the market recently, is also designed for women. Several have made enquiries regarding it, he said.

Strict licensing laws ensure that not all get armed. ‘Law enforcement agencies should consider circumstances and issue licenses to those who require it,” said M.S. Shafiq of “Gun Affairs” in Banjara Hills. “Importantly, no license holder in Hyderabad has misused the weapon. As for Nirbheek, not a single woman has purchased it yet. However, there could be about 50 to 100 women who have gun licenses in Hyderabad, which they may have obtained long ago.”

Though the police is tight-lipped over the number of licenses in Hyderabad, rough estimates suggest it could be over 5,000.

The Indian Arms Act says threat perception and a police record are the key aspects based on which gun licenses are issued. ‘’Many people apply, but most are rejected,” said Shafiq. “People living in remote areas feel unsafe, as do those in farmhouses. The police should consider this and issue licenses. If there is misuse, the agencies can always cancel the license.’’

‘We will examine each request for gun licenses,” said Cyberabad police commissioner V.C. Sajjanar. “But I do not think issuing more licenses will solve the problem.’’

Hyderabad Police Commissioner Anjani Kumar similarly said that license can be granted to anyone who applies but fulfills the criteria.