The Congress leader further alleged that the BJP was destroying the very own fabric of democracy. 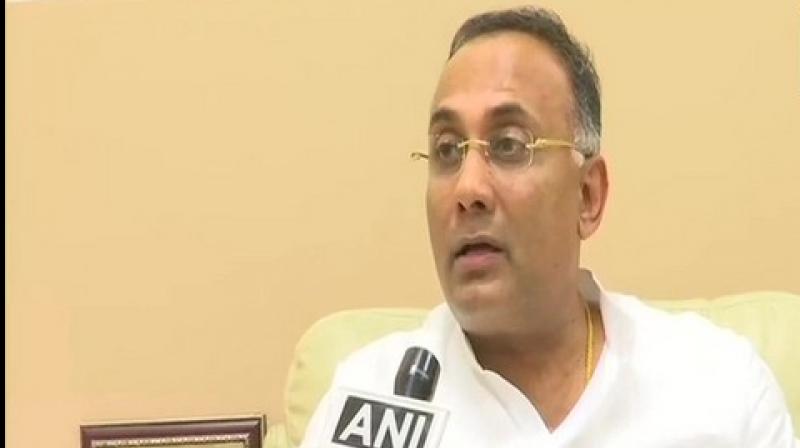 "I hope people of Karnataka teach a lesson that BJP's unconstitutional activities come to a halt," he added. (Photo: ANI)

Bengaluru: Ahead of by-polls to 15 Assembly constituencies in Karanataka, senior Congress leader Dinesh Gundu Rao on Tuesday hit out at the BJP claiming that they were going to be defeated in the elections and if they would try to do another 'operation' people would not tolerate it.

"The survey reports say that they (BJP) are not going to get the numbers. So they are thinking of doing another operation. But I am warning BJP that people will not tolerate this. If they try to do this again, then I think there will be a huge reaction and things will go out of control in the state. There will be very serious consequences," Rao said while speaking to ANI.

Being asked about BJP's door to door campaign in the state, he said: "Today there is a totally negative approach against those people who have betrayed and defected. People know that they have indulged in immorality and are ethically wrong. People want to teach them a lesson."

"I hope people of Karnataka teach a lesson that BJP's unconstitutional activities come to a halt," he added.

The Congress leader further alleged that the BJP was destroying the very own fabric of democracy.

Responding to reports that Congress would join hands with JD(S) after December 9, he said that his party was contesting alone on all 15 seats.

"After the results, we will see what we have to do. For now, we have to bring all the seats to our fold," he said.

On December 1, former Karnataka deputy chief minister G Parameshwara had said that there is a possibility of Congress-JD(S) alliance in Karnataka after the bypoll results.

Senior Congress leader Mallikarjun Kharge also hinted that Congress was not averse to ally with JD(S).

The by-elections for 15 out of 17 seats in Karnataka are slated to be held on December 5. The results will be declared on December 9.