Operation Talwar: How the Navy silently contributed to Kargil win

The Navy Day this year offers the opportunity to reflect on the situation at sea as it obtained during this conflict. 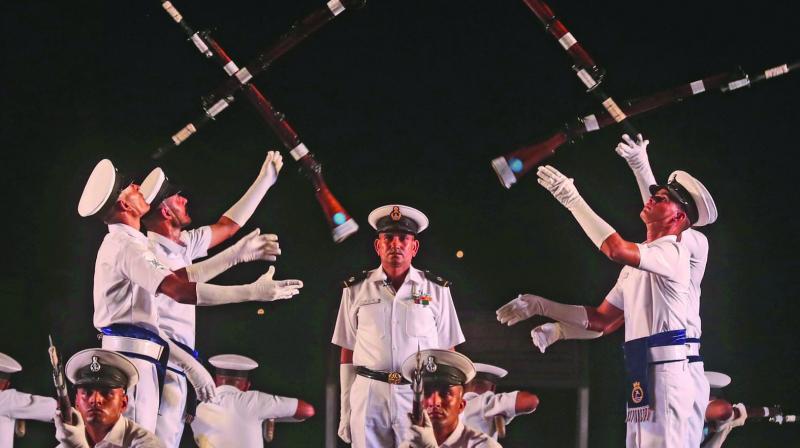 Indian Navy personnel display their skills during a rehearsal for Navy Day celebrations in Mumbai.

On July 26 this year, we celebrated the 20th anniversary of our glorious victory in the Kargil War. As is well known, this conflict, the most televised war in our history, was fought in the icy heights of Kargil in Kashmir from May to July 1999. This war included three independent yet joint operations by the Armed Forces — Operation Vijay by Army, Operation Safed Sagar by the Air Force and Operation Talwar by the Navy. While the contributions of the Army and the Air Force have been well documented and the extraordinary courage of many of their personnel justly celebrated, the actions by the Navy remain largely unknown, characteristic of the Navy’s reputation as a silent service. The Navy Day this year offers the opportunity to reflect on the situation at sea as it obtained during this conflict.

Enough has been written about the misadventure by Pakistan but it is in the nature of human affairs that foolhardy endeavours often result in an escalating spiral of violence with recklessness replacing restraint. Restraint in war is wrought by an active combination of political, diplomatic and military means. While our Political, Diplomatic and Bureaucratic apex played their part admirably in coercive diplomacy, the Indian Armed Forces, in a well-planned joint operation, were able to ensure that Pakistan would remain pinned down and not be able to expand the conflict. The Indian Navy essayed a crucial role in this regard.

The tri-service joint plan by the Indian military leadership at the time included the use of all the elements of military power. It planned to use the Air Force to target the entrenched positions of the infiltrators on the high ridges in the region and the Army artillery to not allow the intruders any rest. Meanwhile the Navy — unencumbered by the constraint of not crossing the Line of Control — deployed proactively in full strength to signal that any expansion of conflict would result in the full might of our military being brought to bear upon Pakistan. The plan was a departure from the strategic restraint that India has generally shown against the sub-conventional provocations by Pakistan. In a recently published memoir called A Prime Minister to Remember – Memories of a Military Chief, Admiral Sushil Kumar, the Navy chief at that time, recollects that “by early June 1999 the task forces of the Indian Navy’s Western fleet had
swiftly deployed and seized
the initiative in the North Arabian Sea”.

The Naval plan, christened Operation Talwar, was a demonstration of intent and capability. All elements of the naval force were pressed into action to, first, ascertain the positions of the Pakistan Navy assets and, second, to ensure that own high value assets in the sea, Bombay High, as well as in the coastal areas, especially in Gujarat, were well protected. The idea was to provide no opportunity to Pakistan to claim success and to ensure that if Pakistan dared to think of expanding the battle from the limited Kargil sector, the Navy would open another front in the South. The operation involved the largest ever deployment of combatant ships in the Arabian Sea. The Western Fleet, which by itself was enough to tackle the Pakistan Navy, was additionally augmented by assets from the Eastern Fleet. As India progressively involved its naval aviation, submarine, amphibious and Coast Guard assets and conducted high tempo operations including Electronic Warfare exercises, the signal was clear. Further, when the Pakistani authorities started bandying about the ‘N word’, India responded by moving ships closer to Pakistan coast, a clear indication that we would not yield to the nuclear blackmail.

This large scale deployment in the Northern Arabian Sea — at one point about 30 ships were reported in the Pakistan media as being at the doorstep of Karachi — was close enough for Pakistan to notice and feel the presence, with the possibility of their supplies being choked. This forced her Navy to shift her assets from Karachi, fearing an Indian Naval strike on the harbour. The late Vice-Admiral G.M. Hiranandani, a naval historian, writing about the war in his book Transition to Guardianship states that Pakistan naval headquarters directed their ships to “keep well clear of the Indian Navy”. Pakistan’s weakness was further demonstrated when it started escorting its oil
tankers from the Persian Gulf along the Makaran coast. Elsewhere in his book, Sushil Kumar brings out that Pakistan Navy Headquarters “signalled their warships to remain in harbour”.

The escort operations revealed that blockade of Karachi and interruption of oil supply from the Persian Gulf were serious vulnerabilities for Pakistan requiring an operational and strategic pause. This, in turn, gave the Army and Air Force the time and leeway to press home their advantage and turn the initial setback into a memorable victory. It has been chronicled that Pakistani PM Nawaz Sharif indicated after the conflict that had the Indian Navy blockaded Karachi, Pakistan had fuel supplies only for six days of conventional combat. Rear Admiral S.Y. Shrikhande, a retired Navy officer and eminent strategic analyst, who was part of the Operation as the commander of INS Delhi in a recent article on the subject opines that “when seen in an aggregated sense, bold deployment and demonstrated readiness with adequate signalling of resolve had considerable effect on the Kargil conflict”.

This war also involved very astute use of information warfare by the Indian Armed Forces. This was the first time that daily joint media briefings were undertaken by senior officers from all the three services in New Delhi. The aim was to undertake messaging, for Indian citizens, for neutral observers and most of all for the antagonist, about the intent and the preparedness of the Indian Armed Forces. Newspaper articles, photographs and television became important tools of information war. For example, photographs of fully armed and ready Eastern Fleet ships in Kochi on their way to the western theatre were reproduced in international media and taken note of in the concerned circles.

There were other places too where the Navy chipped in. The Navy’s squadron of aircraft operated along the Line of Control in support of land forces; specialist hydrography teams were conjoined with the Army’s artillery batteries to pinpoint locations and Navy’s special forces operated in tandem with their counterparts of other services. The Navy also intercepted and arrested a North Korean ship that was carrying missile components to Pakistan and aiding their war effort.

By keeping Pakistan in a continued state of anxiety and alarm about our intentions, by forcing it to spread its assets thin and by conjoining with the other two services where required, one may affirm that the Navy’s role in the Kargil war was silent, understated but significant. As Sushil Kumar states, “the overwhelming superiority of our navy had a sobering effect on Pakistan”. Both national and international media took note of these developments. While Jane’s International Weekly headlined that “Indian Navy muscle hastened end to border fight” the Hindustan Times reported that “Alert navy helped pin down Pakistan to Kargil”. Admiral Sushil Kumar’s book also brings out the visionary role played by Prime Minster A.B. Vajpayee and others in the political apex which percolated down to all echelons whereby all the three services and other agencies operated in a cohesive and coordinated manner during the crisis. The admiral highlights that the instinctive understanding of the Maritime issues displayed by the then Prime Minister, defence minister George Fernandes and external affairs minister Jaswant Singh resulted in clear and unambiguous rules of engagement (ROE) for the Forces at Sea from the precautionary stage onwards.

Over the last 20 years this war has been studied for various reasons — on managing localised conflict, on information operations, on the many dimensions of conventional conflict between two nuclear power states. Perhaps, it is also worth studying for the role that maritime forces can play in contributing to air-land campaigns and managing continental conflicts and whether strategic advantages at sea can be used to offset any disadvantages or constraints on land. As security analyst Iskandar Rehman in his essay in the book The Rise of Indian Navy (Ed Harsh Pant) perspicaciously says, “The idea that the Indian Navy can be highly effective as a game changing flanking force is one which has gained credence since the Navy’s ‘silent’ Kargil victory.”

Admiral Sushil Kumar passed away in the early hours of November 27, 2019. This article is as much a tribute to his leadership as it is a chronicle of the Navy in the Kargil war.

Cmde Srikant Kesnur and Cdr Digvijaysinh Sodha are serving Navy officers with an interest in maritime and naval history. The views expressed here are personal.