Satnami Samaj: An old struggle in a new age

Beyond the fields, down dirt tracks that snake through the countryside — the picture changes, somewhat. 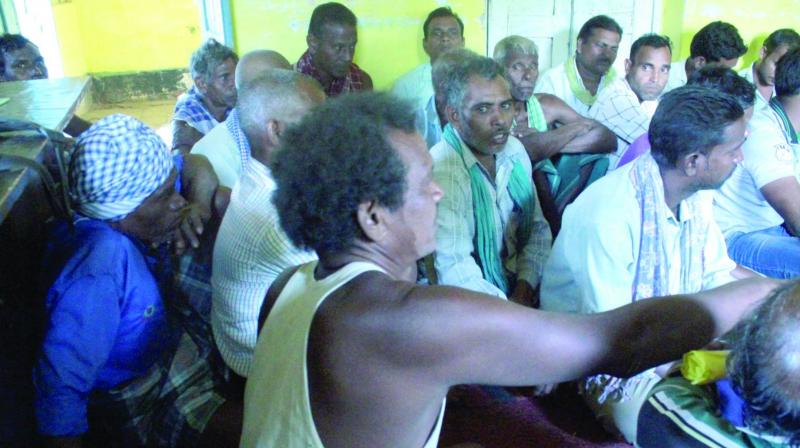 According to sources, the population of Janjgir-Champa comprises of more than 50 per cent dalits.

Beyond the fields, down dirt tracks that snake through the countryside — the picture changes, somewhat. The village Sankrali in this panchayat has open spaces where the community gathers; rows of hutments with some houses in brick and concrete.

According to sources, the population of Janjgir-Champa comprises of more than 50 per cent dalits. Amongst these, Satnamis are said to constitute nearly 80 per cent. Who are these Satnamis? What is the Satnami Samaj that people commonly refer to?

The Satnamis have been traditionally leather tanners. In the highly stratified social order of the preceding centuries, they were relegated to a position of utmost deprivation, subjected to indignity. This was so for many other social groups referred to as “low caste”. In the 19th century from amongst them rose a figure, Ghasidas who led them to defy the discriminatory treatment. This led to a social movement for a more equitable social order and succeeded in giving them a new identity. This is the genesis of the “Satnami Samaj” that took root in the region that lies in what is now — Chhattisgarh.

The march of history has since led to a complete upheaval of the world in which Ghasidas and his followers took up their struggle. Today the Satnamis, along with many dalit groups, have a clear identity under the Constitution of India — Scheduled Caste. As citizens of India their status, of course, is at par with all other citizens from any social, economic or ethnic group. In keeping with the historical deprivation dalits have faced, there are provisions that specifically address this. Today these provisions are an integral part of policy. So where do the Satnamis stand today — do they reflect the intent of the founding fathers of the Constitution, the measures taken by policymakers?

Sankrali village, home to a large community of Satnamis sees them concentrated in nine of the 20 wards. Here most of the houses are kutcha. Yes, the village has an Aaganwadi Bhavan, a post office, a Gram Panchayat Bhavan and a health sub-centre. The village boasts of a primary, middle and high school. According to Rohit Khande, the village headman or mukhiya, several government schemes are in place here such as the Pradhan Mantri Awas Yojana, MGNREGA, Rashtriya Swasthya Bima Yojana and PDS to name a few. This is echoed by sarpanch Gauri Bai Sidar.

Does this mean that the region is on the path of development; is the community on the way to social and economic empowerment? Sadly no. Most people earn their livelihoods through farming, but then, many of them have small holdings. This does not yield enough to even survive, let alone prosper. Jobs are few that too at the block level, but the poor quality of school education and the lack of skill-building avenues prevent people from making use of such opportunities.

What is lacking is an environment for economic advancement, for social empowerment. Despite the infrastructure and various schemes, the community continues to be mired in poverty, suffering deprivation on several counts. They are not getting the benefits of a slew of schemes that are said to be in place. Whether this is a lacunae in implementation or simply a lack of awareness is a question that needs to be asked and answered.

Yet the people here dream. Sarita is a young girl who despite the odds finished her matriculation. She is keen to study further and become a doctor. But her father, who works outside the state, simply cannot afford to support her education beyond this point. Besides, the pressure of getting his daughter married is there. Sarita is crest-fallen. Poverty and social norms that dogged previous generations continue to prevent her from getting an education that could equip her for a better life.

Budhwara, 60-year-old, is poor and infirm. She suffered a stroke some time back and could not get the necessary medical attention. She struggles with even basic movements but still her face reflects hope. She has a fine fighting spirit and believes that she could get better. But it is clear that the systems of healthcare, of social support that are said to be in place, need to be responsive.

Sarita and Budhwara both represent different aspects of the same thing — a society that still remains backward; a system that has simply not come up with answers to their problems. If they could both be enabled to realise their dreams, fulfil their life’s goals — it would equally be a statement of development working on the ground.

Historically, it is on this land that the Satnamis fought against discrimination and deprivation. It is ironical that their descendants still find themselves at the bottom rung of the ladder. Despite the constitutional provisions, state and Central policies, government schemes — they continue to remain bereft of services that could lead them to a life of dignity. Their forefathers had put up a valiant struggle to earn this life in the midst a relentless social order. In this modern day democratic order, is the system failing them? And would that mean that the impetus for change again needs to come from the Satnami Samaj?