After he was denied permission to hold a rally in Mumbai, the newly-elected Gujarat MLA launched a scathing attacked at the Centre. 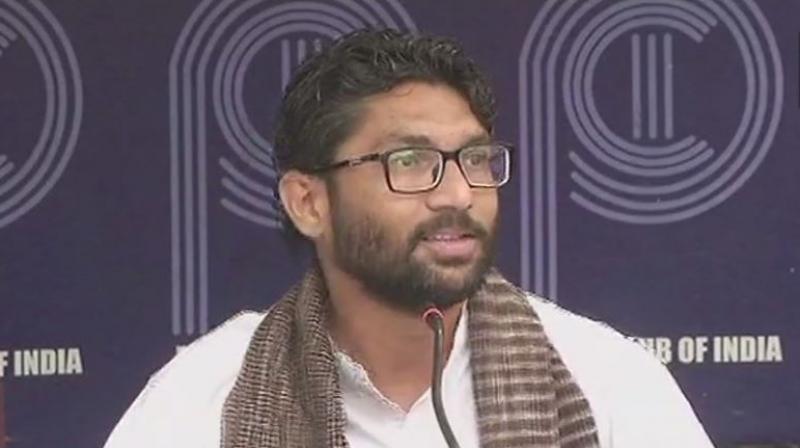 Mevani said the results of the Gujarat Assembly elections have dented the ego of BJP and the charges against him are politically motivated in the wake of his rising popularity. (Photo: ANI/Twitter)

New Delhi: A day after he was denied permission to hold a rally in Mumbai, newly-elected Gujarat MLA Jignesh Mevani launched a scathing attacked at the Centre saying he was being targetted.

Mevani was responding to an FIR registered against him for his alleged "provocative" speech during an event in Pune on December 31. He was addressing the media at a press conference in the national capital.

“I am an elected representative. BJP is scared of me. We want a caste-less India. Don’t Dalits have the right to protest?” Mevani said.

Mevani said the results of the Gujarat Assembly elections have dented the ego of BJP and the charges against him are politically motivated in the wake of his rising popularity.

"Members of Sangh Parivar and BJP made a childish attempt to tarnish my image and target me, it is an after effect of the Gujarat results and it is also because they have a sense of fear about 2019," the Dalit leader added.

Mevani further said by targeting an "established Dalit leader" the government has offended millions of Dalits of the country.

Jignesh Mevani said that he would organise a Yuva Ahankar (youth pride) rally in the capital to protest atrocities against Dalits and other minority communities.

Jignesh Mevani and JNU student Umar Khalid were earlier booked by the Pune police for allegedly “creating communal disharmony” during a “provocative speech” at an event on the 200th anniversary of the Bhima Koregaon battle.

The Pune event was followed by a series of protests across Maharashtra with Mumbai being the hard-hit on Tuesday. On Thursday, the Mumbai police had denied Mevani permission to hold a rally.