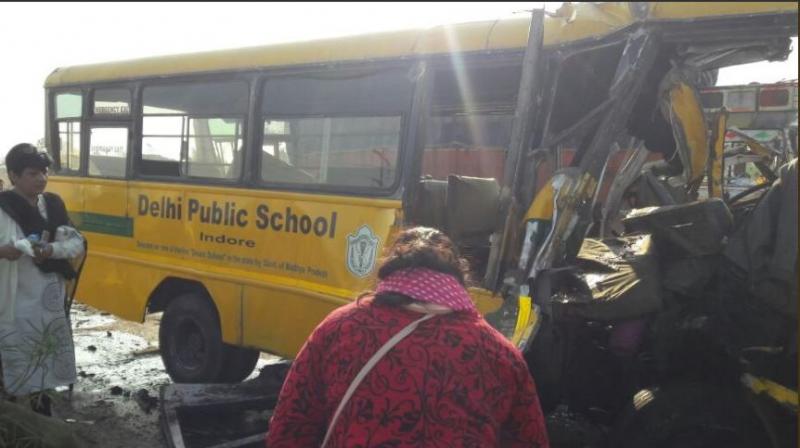 The bus belonged to Delhi Public School and collided with the truck on Kanadia Road in Indore. (Photo: ANI/Twitter)

Indore: Five students of the Delhi Public School (DPS) at Indore, Madhya Pradesh were killed when their bus collided with a truck on Friday afternoon, police said.

The bus driver was also killed, while four other students were injured in the mishap at a bypass near here, they said.

"The bus was carrying students of the Delhi Public School (DPS) when it collided with the truck at Kanadiya bypass. Five students and the bus driver were killed in the accident which occurred because of a steering failure," said Harinarayan Chari Mishra, DIG (Indore).

The injured were admitted to a private hospital, he said.

Additional Superintendent of Police (ASP) Manoj Kumar Rai said the school bus was on its way to drop the students to their homes when the collision took place.

He said the front portion of the bus was badly damaged due to the impact of the crash.

Meanwhile, Home Minister Bhupendra Singh said he has sought a report on the accident from the DIG and the RTO.

Talking to the media, Minister for School Education Deepak Joshi said the government will fix responsibility on schools regarding the safety of students.

"The government had issued guidelines for schools after a school bus accident in Bhopal. We will fix responsibility on schools to ensure the safety of children," Joshi said.