The rear guard was made up of two dozen English huntsmen. 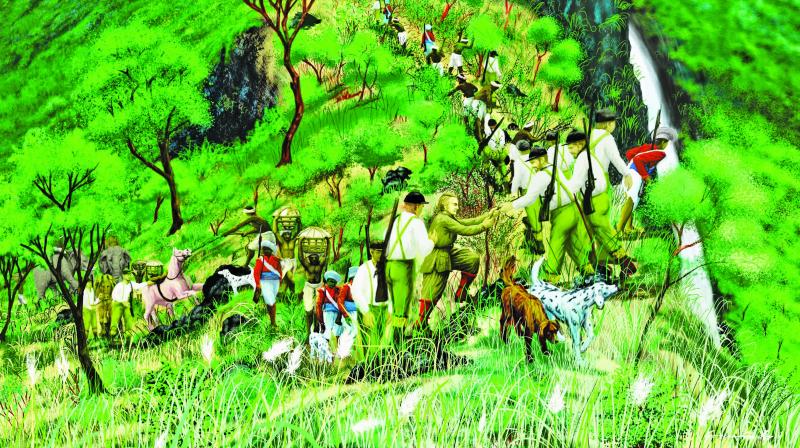 A painting of Sullivan's ascent of Nilgiris by local artist Gokul Gowder printed in the calendar”Bicentenary of Nilgiris 1819-2019) of NDC.(Photo: DC)

Ooty: The expedition of John Sullivan, the then collector of Coimbatore, to explore Nilgiris is said to be tough and an arduous task in the challenging terrain in early 1800s.

Giving an account on Sullivan's expedition, Mr .Dharmalingam Vegugopal, the director of Nilgiris Documentation Centre (NDC), said that John Sullivan set out on January 2 in 1819, by having at his disposal an entire contingent consisting of army men, several dozen war elephants, hundreds of dogs and ponies. The rear guard was made up of two dozen English huntsmen.

“They began the ascent of the mountain from the side of Denaigoukot (now Sirumugai near Mettupalayam in Coimbatore district). After having reached a level of 1,000 feet, the expedition was compelled to abandon its elephants and to throw away nearly all its baggage and climb further by means of cords and pulleys.  Climbing step by step, cutting steps into the rocks and after conquering all the obstacles, the expedition reached the Nilgiris plateau and landed at Dimhutti village in Kotagiri on January 8 on 1819,” he noted.

The paintings done by the local artist Gokul Gowder and reproduced in print in the calendar gives an artist's view on the events in 1819 that represent the unforgettable journeys of Europeans to the Nilgiris.