Covishield to cost Rs.200 per dose, export banned by government

The government is now in a hurry to start vaccination drive, the schedule for which will be announced soon 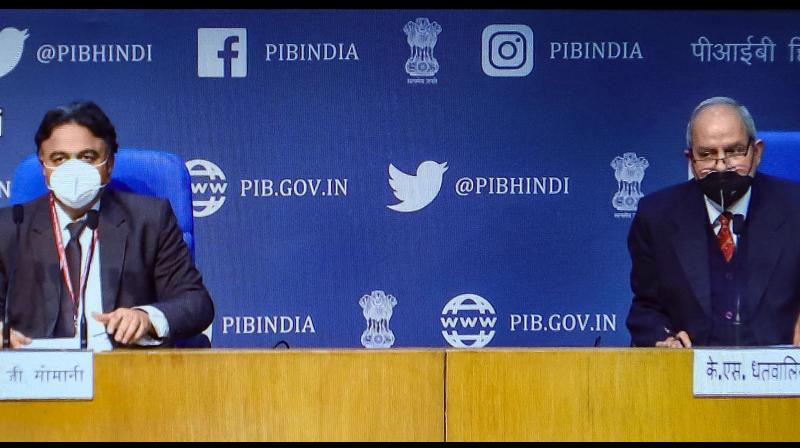 Drugs Controller General of India Dr V G Somani along with Principal Director General of Press Information Bureau K S Dhatwalia (R) during a press conference to announce the approval of Oxford COVID-19 vaccine Covishield, manufactured by the Serum Institute, and indigenously developed Covaxin of Bharat Biotech for restricted emergency use in the country, in New Delhi, Sunday, Jan. 03, 2021. (PTI)

New Delhi: Nine more cases of the new mutant variant of COVID-19 found in the United Kingdom were detected from the Indians who have returned from that country during genome sequencing by Indian labs. The total number of such cases has now reached 38. With the new mutant version of the virus in the air, the government is now in a hurry to start vaccination drive, the schedule for which will be announced soon.

Prime Minister Narendra Modi on Monday thanked the Indian scientists and their technical support staff for developing two indigenous vaccines. “Indian scientists have developed two Made in India COVID-19 vaccines. The entire country is very grateful to them. We will soon start the world's largest vaccination programme,” Prime Minister said during an event.

Apart from already approved Covishield and Covaxin, ZyCoV-D by Zydus Cadila being made in collaboration with the Department of Biotechnology has got approval for Phase III clinical trials.

However, even before the vaccine procurement could begin huge controversy has already started surrounding vaccine licensing and approvals. Several health experts and Opposition leaders have raised concerns over the efficacy of the vaccines claiming there is not sufficient data and clinic trials too are not complete. However, union Health Minister Dr Harsh Vardhan and senior government officials rushed on Sunday to deny these allegations and ally the concerns while underlining that vaccine licenses are given only after approval under standard procedure, hence, all licensed vaccines are completely safe.

On Monday Bharat Biotech Chairman and Managing Director Krishna Ella held a press conference to say that the concerns with regard to their vaccine Covaxin is unfound and that their product is no inferior to other vaccines in the market and is “safe, like water". On Sunday, ICMR chief Dr Balram Bhargava said that Covaxin has the potential to fight the new mutated strain of the COVID-19 virus better than other vaccines.

Ella said that Bharat Biotech is conducting clinical trials in more than 12 countries apart from with regard to Covaxin. “We are not a company without experience in vaccines. We have tremendous experience in vaccines," adding that the vaccine showed 100 per cent protection during animal trials.

Ella also underlined that Covaxin is an " inactivated vaccine and safe for 12 years and above age group”. DCGI has also allowed Bharat Biotech to conduct its clinical trials on children above the age of 12 years. On a question if Covaxin will be effective on the new mutant UK strain of the virus, Ella said: “Give me one week’s time, I will give you confirmed data.”

Meanwhile, Chief Executive Officer of Serum Institute of India, Adar Poonawala, told news agency Associated Press that the government has imposed a ban on the export of its vaccine Covashield. In addition there is also a prohibition for SII to launch or sell its vaccine in the private market and added  the decision was also made to prevent hoarding.

He said SII will be selling the first 100 million doses of its COVID-19 vaccine to the Indian government at a special price of Rs 200 per dose, after which the price will be hiked. According to the interview, the vaccine will be sold on the private market at Rs 1,000 per dose.