India   All India  05 Jan 2022  India hits back, shows its soldiers at Galwan on New Year
India, All India

India hits back, shows its soldiers at Galwan on New Year 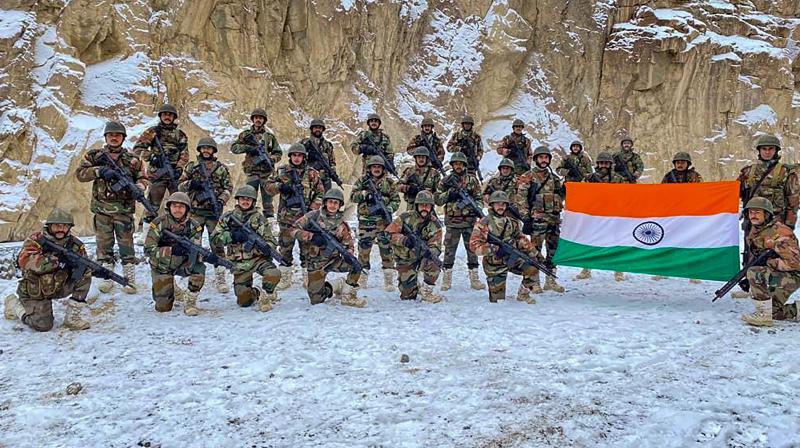 Indian Army soldiers pose for a photograph with the national flag on the occasion of New Year 2022, at the Galwan Valley in Ladakh, Tuesday, Jan. 4, 2022. China released a video of their troops with their flag at the Galwan Valley, on Saturday. (PTI Photo)

New Delhi: Countering the Chinese military’s propaganda, the Indian security establishment on Tuesday released photographs showing Indian troops holding the tricolour in the Galwan Valley in eastern Ladakh at the dawn of the New Year.

In one of the photos, released by the Indian security establishment on Tuesday, around 30 Indian soldiers were seen with the national flag. Another photo showed the group, with four of them holding the flag, and another tricolour flying high on a flagpole near a temporary observation post. In both the photographs, the Indian soldiers are seen with their newly-acquired US-made Sig Sauer advanced assault rifles.

The Chinese propaganda video had also become a political issue after Congress leader Rahul Gandhi had raised it. “Only the Indian tricolour looks good in Galwan. India must give a fitting reply to China. Modiji, break your silence,” Mr Gandhi had tweeted.

The latest provocation from China had emerged after it came up with its own names for over a dozen places in Arunachal Pradesh.

The 13th round of the India-China corps commander-level military talks in October had ended in a stalemate, with the Indian Army saying the “constructive suggestions” made by it were not agreeable to the Chinese side.

In their virtual diplomatic talks on November 18, India and China agreed to hold the 14th round of military talks at an early date to achieve the objective of complete disengagement in the remaining friction points in eastern Ladakh. However, the Chinese side is yet to respond or agree on a date for the next round of military talks.

There is no let-up in Chinese activity at the LAC. They are continuously upgrading their infrastructure at the LAC and placing a large number of troops and heavy weapons on the front line with India.