On the absence of Congress leaders at his residence on Monday, Pawar said this was an unscheduled meeting. 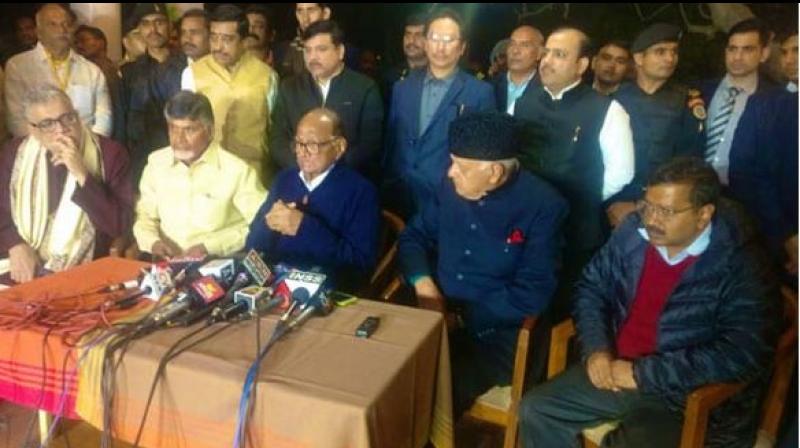 New Delhi: Leaders of various opposition parties met at Nationalist Congress Party (NCP) chief Sharad Pawar's residence in Delhi on Monday and discussed their joint strategy to take on the ruling BJP on various issues, including what they say is misuse of the Central Bureau of Investigation by the Centre.

Pawar later said that earlier during the day, leaders of several opposition parties had met in the chamber of Leader of Opposition in Rajya Sabha Gulam Nabi Azad and discussed certain issues.

"The problem in the agriculture sector and unemployment, which is affecting a sizeable section of the younger generation. We discussed the issue of the assault on democratic institutions. We decided that on these three issues, we would meet again," Pawar told reporters after the meeting that lasted for over an hour.

"But what happened yesterday in Kolkata, we cannot say or we cannot bypass that issue. We have to decide on this issue either tomorrow or day after tomorrow. The Congress and all other parties will sit and we will make some definite programme. We want to support Mamata ji on this issue," he added.

Pawar was referring to the showdown between the West Bengal chief minister and the Centre over an attempt by the CBI to question the Kolkata police chief in connection with the Saradha chit-fund scam case.

Mamata Banerjee has sat on a protest in Kolkata in defence of the police officer.

"What happened to Mamata ji is not about only Mamata ji, we have seen it in Delhi.

"Arvind Kejriwal, his office, his senior officers, have also faced similar issues. So, this is a clear-cut attack on democratic institutions... We will sit along with all other political parties, especially those who were present in yesterday's meeting and today's meeting, and one definite programme will be made," Pawar added.

He said all 23 parties which participated in the Kolkata rally hosted by Banerjee on January 19 against the BJP-- including Samajwadi Party, Bahujan Samaj Party, Congress, Telugu Desam Party, Dravida Munnetra Kazhagam, NCP and AAP-- condemned the CBI action on Sunday.

"Some of our people are meeting Mamta ji in West Bengal independently. Individually, they are going and expressing their solidarity. Now, we are thinking, as Sharad Pawarji has rightly mentioned, in a day or two we will meet again and have a collective strategy to move forward," he said.

On the absence of Congress leaders at his residence on Monday, Pawar said this was an unscheduled meeting.

"When Chandrababu came to Delhi, I got a communication that he would like to come and sit. It was a courtesy call."

Kejriwal said, "Whatever is happening in Kolkata, we have been facing it for the past four years due to the Modi government."