'TMC government is hiding many facts that have ruined Bengal, and hence are stopping BJP leaders from coming here,' says Yogi Adityanath. 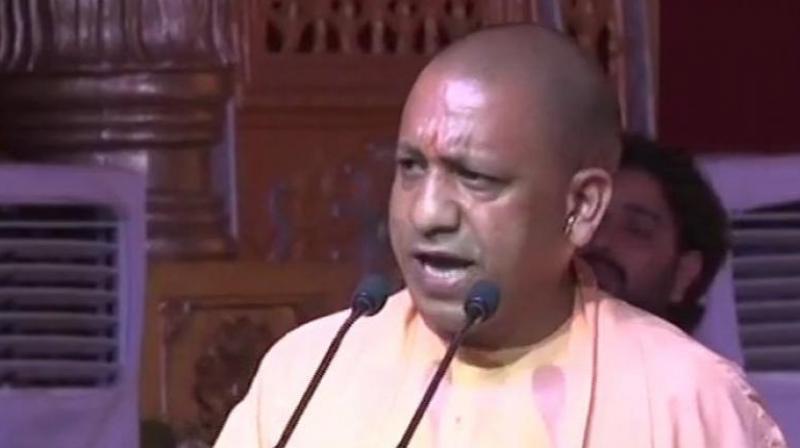 "You must have seen how Mamata Banerjee is trying to save a corrupt officer. Nothing can be more shameful, undemocratic and unconstitutional than a chief minister of a state sitting on a dharna (sit-in protest) to ensure that secrets of corruption don't spill out," Yogi Adityanath alleged. (Photo: ANI/Twitter)

Purulia: A ‘Sanyasi’ like me was denied permission to set foot on the soil of West Bengal as TMC government led by Chief Minister Mamata Banerjee is indulging unconstitutional and undemocratic acts, said Uttar Pradesh Chief Minister Yogi Adityanath on Tuesday.

“I came to pay respects to the land that gave us our national anthem. However, this government is indulged in undemocratic and unconstitutional activities. They don’t believe in the Constitution. That is why a ‘Sanyasi’ and ‘Yogi’ like me denied the permission to step onto the soil of Bengal,” he told ANI en route to Purulia district.

Chief Minister Adityanath was denied permission yet again to land his chopper in West Bengal following which he landed in Jharkhand’s Bokaro and travelled to Purulia by road to address a public rally.

On the denial of permission to land in West Bengal, Chief Minister Adityanath asserted that the ‘undemocratic’ West Bengal government was one that cannot last for long.

“I can only say that Mamata Banerjee’s undemocratic government will not run for long. BJP cadres are fighting this battle fiercely and I laud them for that. They (TMC government) are hiding many facts that have ruined Bengal, and hence are stopping BJP leaders from coming here,” he said.

“This thought process itself is distorted. I have come to Purulia to address this. BJP will emerge victorious. This is Syama Prasad Mukherjee’s land. Under Prime Minister Narendra Modi’s leadership, Bengal will prosper,” he added.

Uttar Pradesh Chief Minister Yogi Adityanath on Tuesday accused Mamata Banerjee of exploiting the poor in West Bengal and being only interested in saving a "corrupt" officer allegedly involved in the Saradha ponzi scam.

Adityanath, who travelled by road to this West Bengal town to address a rally after flying to Bokaro in neighbouring Jharkhand, also referred to the Supreme Court's order directing Kolkata Police Commissioner Rajeev Kumar to "faithfully" cooperate with the CBI in the investigation of the Saradha scam.

He questioned why West Bengal Chief Minister Banerjee was trying to protect the police officer. "You must have seen how she is trying to save a corrupt officer. Nothing can be more shameful, undemocratic and unconstitutional than a chief minister of a state sitting on a dharna (sit-in protest) to ensure that secrets of corruption don't spill out," Adityanath alleged.

Calling the TMC government in West Bengal as "corrupt and undemocratic", he criticised Banerjee for not allowing benefits of central schemes to be passed on to the people of the state.

Earlier in the day, Banerjee had said the Uttar Pradesh chief minister should concentrate on his own state.

Adityanath was scheduled to address two rallies in West Bengal on February 3, one in North Dinajpur district's Raiganj and the other in South Dinajpur district's Balurghat. However, the TMC government declined permission for Yogi’s chopper to land for both rallies without any prior notice.

Later that day, Yogi addressed the rally in Raiganj via telephone and accused Banerjee of carrying out “shameful” activities in the state.

The BJP has condemned Chief Minister Banerjee for allegedly creating obstacles for the party in conducting rallies and other events in the state, while also criticising her government for the ongoing tussle between the CBI and the state police over Saradha scam probe.