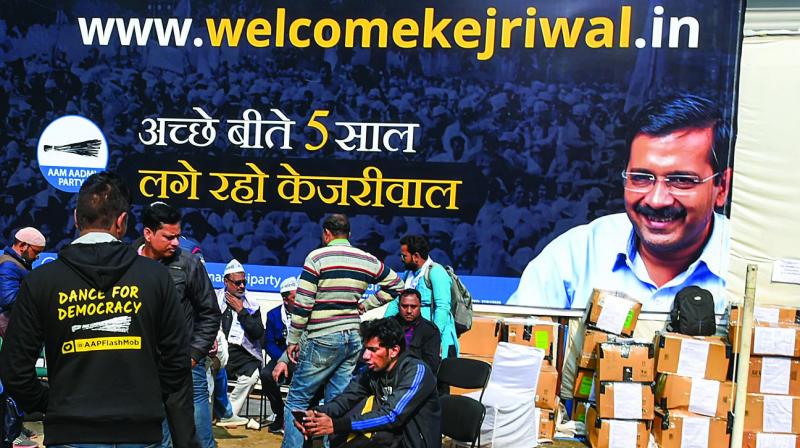 NEW DELHI: The Aam Aadmi Party on Tuesday promised to make Delhi a modern, bustling, 24x7 city by allowing markets to remain open round-the-clock, but at the same time the party announced that it will introduce a “patriotic curriculum” in the city’s government schools if voted back to power.

The AAP, which is facing a tough fight from the Bharatiya Janata Party for the 70-member Delhi Assembly, tried to beat the saffron party at its own game by making a nationalistic pitch in its manifesto released four days before Delhi goes to vote.

The AAP’s 28-point manifesto promises that the party will come up with a “Deshbhakti” curriculum that, deputy chief minister Manish Sisodia said, will help induce a sense of nationalism, love for India’s armed forces and respect for the tricolour.

Though AAP leaders did not elaborate what exactly will be taught in the name of patriotism, the mention of the armed forces suggests that the AAP’s nationalism won’t be very different from that of the BJP. But it will be more expansive, inclusive — AAP’s 2020 manifesto begins with a vow to “serve and uphold, justice, liberty, equality, fraternity enshrined in the Preamble to the Constitution of India”.

The AAP, however, has chosen to do away with a categorical assurance of being committed to the well-being of minorities as it had done in 2015 when the party spoke up against attacks on places of worship and inflammatory speeches.

“The recent communal tension witnessed in Delhi is totally out of sync with the social fabric of the city. We stand firmly against attacks on places of worship and inflammatory speeches across Delhi,” the party had said in its previous, 70-point manifesto. But this year, when the BJP has made inflammatory speeches and targeting the Muslim community the mainstay of its election campaign, AAP has tried to counter the BJP’s nationalism rhetoric but not offered any assurance to protect minorities.

Among the party’s game-changing poll promises that’s of particular interest to the trading community are round-the-clock markets in the Delhi and expanding the Metro network to make it the “world’s largest”.

The first phase of Delhi’s 24x7 experiment will be in some key commercial areas, AAP leaders said.

The AAP, in an attempt to attract Delhi’s 30-40 lakh Poorvanchali voters, has promised to pursue the inclusion of Bhojpuri into the eighth Schedule of the Constitution.

AAP convener and Delhi chief minister Arvind Kejriwal said that after working on development issues for five years, it was time to take Delhi to the next level. Mr Sisodia said that his party’s vision was to run a government to help every citizen of Delhi to live a dignified life and make their families prosperous.

Mr Sisodia said the AAP government will try to fulfil the long-pending demands of Delhi Jan Lokpal and Delhi Swaraj Bill along with a full statehood if it comes to power.

“The Delhi Jan Lokpal Bill, which was passed in the state Assembly in 2015, has been pending with the Central government for the last four years. The AAP government will continue its struggle to get the bill passed,” he said.

Full-statehood status would mean that Delhi’s law and order machinery, i.e. the police force, and DDA will come under the purview of the Delhi government.

The AAP had earlier released a 10-point guarantee card that, Mr Sisodia said on Tuesday, remains a part of the party’s 2020 manifesto. Good education to every child, medical facilities, reducing Delhi’s pollution to one-third and clearing loose overhead electrical wires in the city are among the 28 promises.

Mr Sisodia said that his government is also committed to cleaning the Yamuna. “Clean air and clean Yamuna is the vision of the Aam Aadmi Party.”

The party also promised to provide ‘mohalla marshals’ for women’s security and said it will continue with its ongoing projects of installing CCTV cameras and removing dark spots by putting up new street lights.

The AAP has also said it will ensure doorstep delivery of ration and free pilgrimage to 10 lakh senior citizens.

After being accused of failing Delhi’s sewage workers by the BJP, the party has also promised a compensation of Rs 1 crore to families of sanitation workers who die while performing their duty.