The government announced that it shall now start universal screening for all passengers flying into India from abroad. 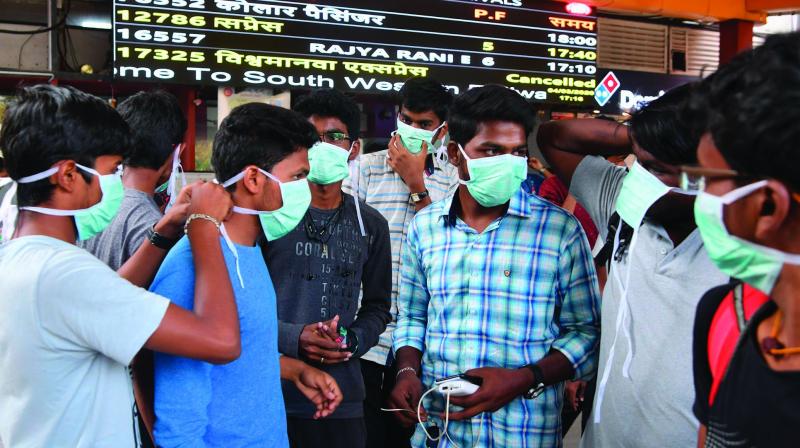 Tourists wear facemasks as a preventive measure against the spread of the COVID-19 coronavirus outbreak at the Bangalore City Railway Station on Wednesday. (Photo: PTI)

As the Centre, the Delhi government and several state governments held a flurry of meetings, e-commerce payment system Paytm said an employee in Gurgaon has tested positive for the coronavirus. A health ministry official confirmed this coronavirus case.

In a statement on Wednesday night, the company said the infected employee had recently returned from a vacation in Italy, which is fast emerging as a hub for the outbreak after China.

The government announced that it shall now start universal screening for all passengers flying into India from abroad. Earlier, only passengers coming in from China, Hong Kong, Japan, South Korea, Thailand, Singapore, Nepal, Indonesia, Vietnam, and Malaysia were being checked. All government departments will consult the health ministry before organising conferences and international meets in the country in the coming days, it was decided on Wednesday at an inter-ministerial meeting chaired by the principal secretary to the Prime Minister.

“Holi is a very important festival for we Indians but in the wake of Coronavirus, I have decided not to participate in any Holi Milan celebration this year. I also appeal everyone to avoid public gatherings and take a good care of yourself and your family (sic),” Mr Shah tweeted.

The 16 Italians and their Indian driver have been sent to Indo-Tibetan Border Police’s (ITBP) quarantine facility in Chhawla.

One infected person is a 45-year-old man from Delhi who had recently gone to Italy, and the six fresh cases confirmed are his family members whom he had visited in Agra shortly after arriving from Vienna.

All of them continue to be in isolation in New Delhi’s Safdarjung Hospital, said the minister.

A Bengaluru-based techie in Hyderabad had tested positive on Monday. First three coronavirus patients in the country from Kerala, who contracted infection last month, have been cured.

At the meeting, chaired by P.K. Mishra, the home ministry was tasked with working closely with state governments, including relevant district administration officials, to ensure compliance with screening protocols at Integrated Check Posts (ICPs) on India’s land borders.

Over 5,89,000 people have been screened at airports in two months, over 10 lakh screened at borders with Nepal and around 27,000 are currently under community surveillance, he added.

Delhi chief minister Arvind Kejriwal said efforts are on to check and screen 88 people who came in contact with the Delhi man who tested positive for coronavirus.

A taskforce headed by him has been formed to tackle the situation emerging from the coronavirus infection and there is no need to panic, he said at a press conference.

A coronavirus testing lab will be set up at the Lady Hardinge Hospital and also at the LNJP Hospital if necessary, Mr Kejriwal said. There is no shortage of masks, the chief minister added.

Municipal corporations in Delhi are contacting and screening tourists from four countries where most cases of the infection have come to light. The screening is being done at hotels and guesthouses in the city, he said. Isolation wards in 19 government and six private hospitals are being readied in case of need, Mr Kejriwal stated.

Even though local administration has not asked any school to close down, three schools in the national capital and adjoining areas have announced holiday for students and staff as a precautionary measure to prevent spread of coronavirus, while two schools advanced their spring break and others sent out advisories to parents.

Sardar Patel Vidyalaya in Delhi has asked parents to inform school authorities if anybody in the family or even relatives who frequently visit are suffering from cough and cold. Schools in the region have also suggested parents to not send their wards to attend classes even in case of mild cough or cold.