For the Adyar Poonga to bloom

The removal and rehabilitation of fishermen at the estuary holds back the completion of Adyar Poonga eco-restoration project. 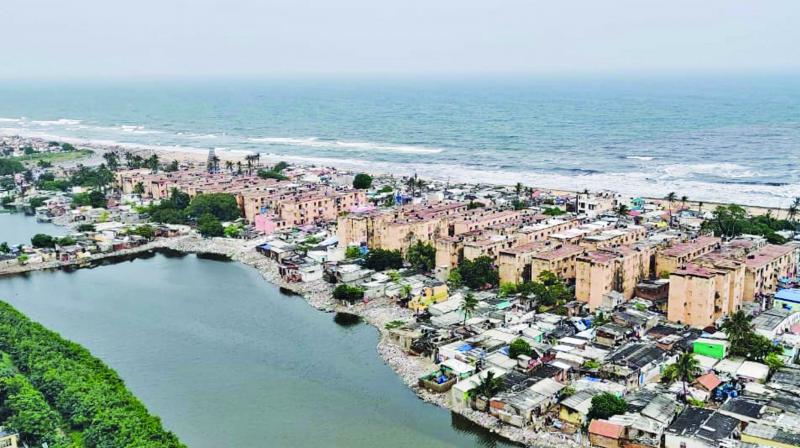 An aerial view of the Adyar creek and estuary. On the left of the canal is the poonga, and the slum is located on the opposite side. (Photo: ASIAN AGE)

CHENNAI: The failure of the authorities including the Chennai River Restoration Trust (CRRT) to address the concerns of the fishermen community living on the Adayar estuary is holding back the completion of the second phase of the ambitious Adyar Poonga river restoration project in Chennai.

The project that covers 358 acres involves dredging the Adyar Creek and estuary that fall under CRZ III category was kicked off in 2011 after the inauguration of the phase I for which the state government had allotted Rs 24.93 crore. The project involves removing the debris, plastic and sludge from the creek, and planting mangroves and trees of native species.

Officials of Tamil Nadu Slum Clearance Board (TNSCB) say that the slums need to be cleared for the completion of the project. CRTT, the implementing agency, has proposed an integrated development plan of the land south of the Marina in 74.04 acres for the rehabilitation of the 8166 project affected families (PAF) from Navalur, Gundapakkom, Perumbakkam and AIR Land.  The highways department and the Tamil Nadu Housing Board have also introduced projects for the comprehensive development of the Adyar neighbourhood. While Housing Board has proposed an integrated housing complex in Foreshore estate area, the CRRT had a project to develop the Adyar creek adjacent to the project area.

The slum dwellers, most of them belong to the fishermen community, however, have opposed the idea to relocate them to faraway places. Sources point out that the opposition stems from the fact that the houses fishermen built on the estuary and rented out have offered them a steady source of income, though they are on the ecologically sensitive area. “However, CRRT has no plan to restrict fishermen access to the river area since they are the direct stakeholders of the river system,” they said.

Criticising the intent of TNSCB, K. Saravanan, a fisherman-turned coastal protection activist, pointed out that the officials did not want to focus on big building complexes on the river bank that pollute the river. “They want to conserve the river and water bodies at the cost of fishermen community who are cohabitants of nature,” he alleged.

The officials classify the area as slums though fishermen have been living there for decades, he said. “They extend their settlement as their families expands. It’s quiet natural. So the CRRT authorities have to take the fishermen community into confidence before pushing its agenda.”

He also pointed out that the recent order of Madras High Court directing Chennai Corporation to consider the possibility of rebuilding the Broken Bridge and extending the Marina Loop Road to Besant Nagar was a bolt from the blue for the fisherfolks. ‘Fishing communities are among the first residents of Chennai. The villages of Urur Olcott Kuppam, Nochikuppam, Mullikuppam and Dummingkuppam are ancient hamlets that have existed for centuries,” he pointed out.

Meanwhile, a professor with department of ocean engineering of Indian Institute of Technology (IIT), Madras, said the people residing around river mouth should be relocated since the area is ecologically sensitive. “The Tsunami lesson in 2004 has taught us how vulnerable the lives in coastal lines are,” he said. “It’s scary to see a lot of people occupy Adyar estuary which is a dynamic place with shifting sands and water lines. The slum dwellers can also be seen in the Buckingham canal area.”

Nityanand Jayaraman, an environmentalist, restoration of the creek would mean bringing it back to its natural condition. “I would like to call this a transformational project where an existing natural ecosystem is being engineered into a tourist spot,” he said. “The marshland of Adyar creek under the river restoration project is being turned into an artificial freshwater ecosystem in the process.”