Italian tourists at ITBP shifted to Medanta hospital in Gurgaon 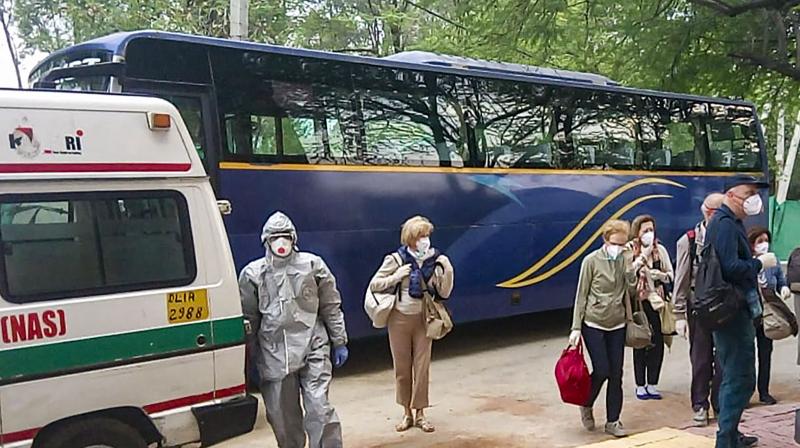 21 Italians tested positive for the coronavirus leave from ITBP quarantine facility for their treatment at designated hospitals, in Chhawla. PTI photo

The fourteen Italians, who have tested positive for coronavirus, have been shifted to the Medanta Hospital in Gurgaon from an ITBP quarantine centre.

The hospital issued a statement on Thursday morning, saying these patients are housed on a completely separate floor, which has been quarantined and has no contact with the rest of the hospital.

There is a dedicated medical team wearing protective gear looking after these patients.All items used on the floor are isolated to that floor.

The isolated floor will completely contain the disease even with these asymptomatic persons. All other hospital operations are operating as normal, and there is no increased risk to patients, visitors or staff, the statement said.

Twenty-one Italian tourists and their three Indian tour operators were shifted out from an ITBP quarantine centre here on Wednesday as they were exposed to novel coronavirus.

An affected Italian couple is being treated at Jaipur's SMS medical college.

Officials on Tuesday said the foreigners have been sent to a private hospital in Gurgaon and a centre in the national capital while the Indians have been transferred to the Safdarjung Hospital.

Fourteen Italians and an Indian (driver), who were in the same group as the affected Italian couple, tested positive for the virus as per information provided by the Health Ministry.

The Italian tourists and three Indians were admitted to the Indo-Tibetan Border Police (ITBP) force centre in Chhawla on Tuesday.

The Centre already has 112 people, 76 Indians and 36 foreigners, since February 27 after they were evacuated by an Indian Air Force (IAF) plane from China's Wuhan, the epicentre of the deadly coronavirus.

The first samples of these 112 people had tested negative when reports came in last week.