India   All India  05 Mar 2020  Orchha, a melting pot of culture, history and adventure
India, All India

Orchha, a melting pot of culture, history and adventure

Situated in Niwari district by the banks of river Betwa, Orchha is a jewel in the crown of Madhya Pradesh Tourism. 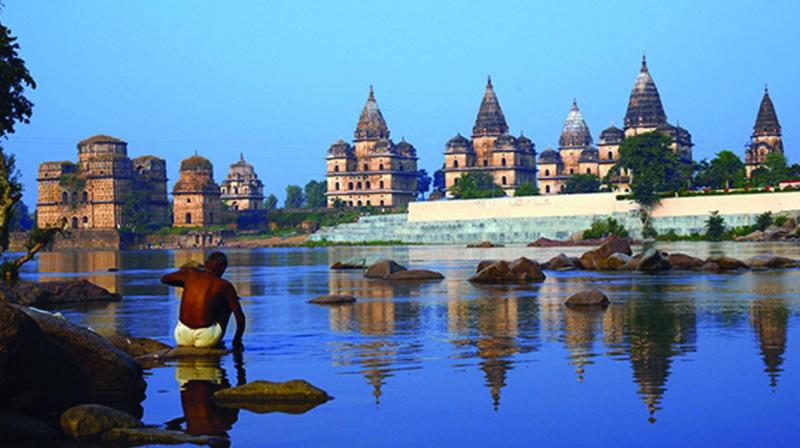 The massive but deity-less Chaturbhuj Temple reached by a steep flight of steps also dots the Orchha landscape.

Likhan Baithi Jaaki Sakhi Gahi, Gahi Garab Garur Bhaye Ne Kete Jagat Ke Chatur Chitere Koor (A number of accomplished painters were eager to paint her picture but none of them were successful as her beauty could not be caught in the painting)

These lines not only sum up the legendary beauty of celebrated consort Rai Praveen but also the cultural efflorescence that the quaint town of Orchha witnessed during the medieval period. Its exquisite palaces, the sublime cenotaphs, the heavenly temples and the vivid murals — all bear testimony to the bygone golden era. Built-in 16 th and 17 th centuries, the monuments of Orchha have retained much of their pristine splendour under the custody of the State Archaeology Department.

Situated in Niwari district by the banks of river Betwa, Orchha is a jewel in the crown of Madhya Pradesh Tourism. Literally meaning ‘hidden place’, the once impregnable town boasts of Bundela stone legacy and pristine wilderness. Founded in 1531 CE by Bundela chief Rudra Pratap Singh, it has recently received the National Award for Best Heritage City and nomination to tentative list of UNESCO World Heritage Sites. It is poised to be part of a new Golden Triangle itinerary which earlier comprised primarily of Delhi, Jaipur and Agra. A 5 hour drive away from Delhi, Orchha can also be easily reached from Gwalior airport (115 km) or Jhansi railway junction (16 km) Orchha is synonymous with the Ram Raja Temple — the only temple in the country where Lord Ram is worshipped as a king. An unusual Guard of Honour for the Lord is held here everyday by the police personnel. Flanking it is the stunning Laxmi Narayana Temple which is an architectural synthesis of fortress and temple. The splendid wall paintings of the Bundela school of art can be seen here. The massive but deity-less Chaturbhuj Temple reached by a steep flight of steps also dots the Orchha landscape.

The soaring spires and palatial architecture of Orchha Fort Complex speak volumes about the regal past. The garrison fort Jehangir Mahal, erected to commemorate visit of Emperor Jehangir, is now a museum while royal palaces Sheesh Mahal and Raja Mahal have been remodelled into heritage hotels. The summer retreat of Bundela kings — the Phool Bagh houses ventilation towers Saawan-Bhado used to stimulate rainfall in the palace-pavilion. The allure of Rai Praveen, no lesser than that of Roopmati and Mrignayni, is immortalised in her well-preserved life size portraits in various dancing poses in the Rai Praveen Mahal. The astonishing murals seem like the muse of poet Keshav Das from his magnum opus Rasik Priya, has frozen in time and space in these walls. Sundar Mahal and Dinman Hardaul Mahal enclose little shrines which ardent devotees throng for pilgrimage and meditation. Bundeli folklore has it that any spoken wish at Hardaul Vatika is always granted. The ornate fourteen Chhatris (cenotaphs) located at the end of Fort Complex along the Kanchana Ghat of the river Betwa epitomize the valour of erstwhile Bundela rulers chronicled also in the Mughal text Akbarnama.

A stone’s throne away is located the Tumgaranya Wildlife Sanctuary. The sanctuary situated between rivers Betwa and Jamini is abode to varied wildlife like sloth bear, jackal, panther, woodpecker and kingfisher. Apart from nature walks and jungle trekking, it offers rafting opportunity along rapids of Satdhara, the criss-crossing channels of Betwa.

Undoubtedly, Orchha is a melting pot of culture, history and adventure. To celebrate this enchanting town, Madhya Pradesh Tourism Board has announced the inaugural Namaste Orchha Festival from 6-8 March, 2020. The three day extravaganza will feature heritage walks, nature trails, wellness walks, rafting, food and crafts bazaar, handicrafts workshop and business conclave. Betwa Maha Arti on the Kanchan Ghat on lines of Ganga Arti in Varanasi, 3D Ramayana shows on the frontage of Jehangir Mahal, helicopter aerial view of city and cultural evenings around a Baobab (Kalpavriksha) tree will be of immense interest to the visitors. The festival finds synergy with vision of Chief Minister Kamal Nath of boosting economic activity and employment generation.

The nostalgic beauty of Orchha never fails to mesmerise its visitors and an itinerary during Namaste Orchha Festival promises to be an engaging experience. Give the majestic town a chance to make you fall in love with itself!