MoS Home Rijiju said that he was amazed to see Cheetah smiling and that his battle with life will boost the morale of other officers. 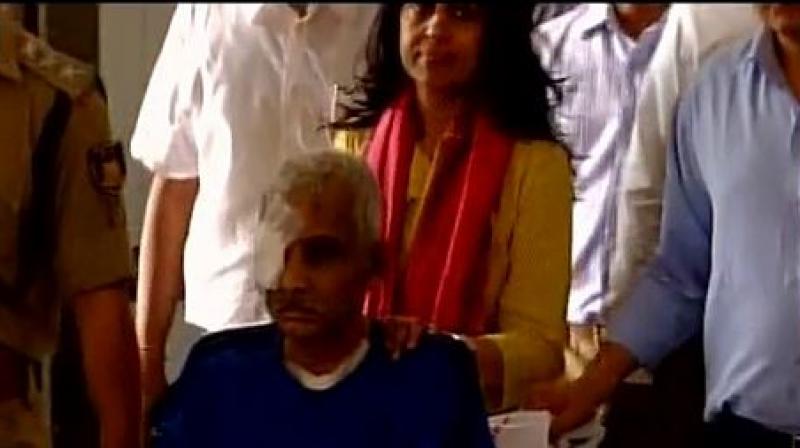 CRPF commandant Chetan Cheetah, who had slipped in to coma for two months after being shot nine times during an encounter with three terrorists in Kashmir' Bandipora. (Photo: ANI Twitter)

New Delhi: Minister of State (MoS) for Home Affairs Kiren Rijiju on Wednesday met CRPF commandant Chetan Cheetah, who had slipped into a coma for two months after being shot nine times during an encounter with three terrorists in Kashmir' Bandipora.

Rijiju said Cheetah expressed his desire to get back to work as soon as possible.

Thanking the doctors at AIIMS for their extraordinary work, Rijiju said that he was amazed to see Cheetah smiling and that his battle with life will boost the morale of other officers.

"He is doing very fine. Its miraculous, first of all I would like to thank team of doctors from AIIMS. The day I came here when he was brought from , it was difficult to imagine that he will talk to me," said Rijiju.

"We are very proud of him. He is a brave officer and this will boost the morale of all the other jawans. He was smiling and was excited to get back on duty. This shows his ability to survive and his will power," he added.

The CRPF commanding officer was in coma two months ago after being hit by at least nine bullets during a gun battle with terrorists in Kashmir' Bandipora on February 14.

The 45-year-old had suffered bilateral upper limbs fractures, bullet injuries in his head and lost his right eye during the bloody encounter that claimed lives of three Indian soldiers.

Cheetah, a Commanding Officer of the 45th battalion on March 16, was shifted to normal ward from the Intensive Care Unit (ICU) and was also taken off the ventilator.

Cheetah was first taken to a military hospital in where medications were given to prevent bleeding. However, given the extent of the injuries and his comatose state, it was decided to airlift him to the AIIMS trauma centre.