The talks were held at the “Joint Secretary/Director General/Assistant Secretary level”. 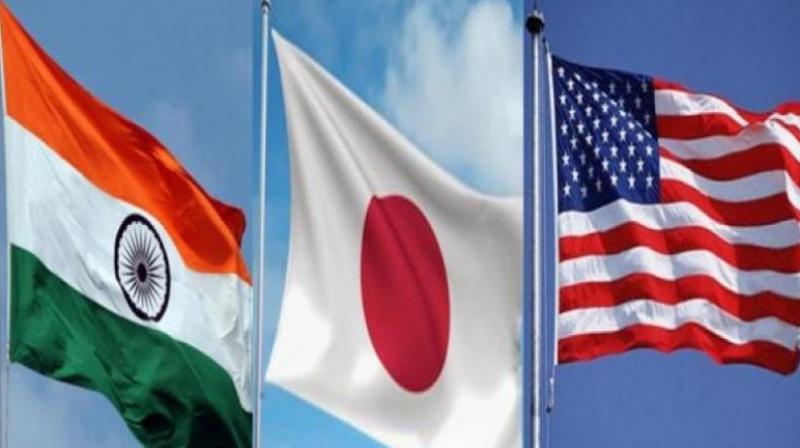 India, Japan, the US and Australia have already held consultations ahead of the proposed formation of a “quadrilateral” in the Indo-Pacific region to strengthen maritime cooperation.

New Delhi: In a veiled message to China on Wednesday, India, Japan and the United States held trilateral talks in New Delhi and resolved to work towards a “free, open, prosperous, peaceful and inclusive Indo-Pacific region” as well as strengthen maritime security. The talks were held at the “Joint Secretary/Director General/Assistant Secretary level”.

In a  joint press statement, the two sides resolved to “enhance cooperation in the areas of connectivity and infrastructure development; counter-proliferation; counter-terrorism; maritime security, maritime domain awareness and Humanitarian Assistance-Disaster Relief (HA-DR)”. The three countries also agreed “to strengthen cooperation in support of a free, open, prosperous, peaceful and inclusive Indo-Pacific region through partnership with countries in the region”.

In a statement, the three countries said, “India, Japan and the United States held the 9th Trilateral Meeting at Joint Secretary/Director General/Assistant Secretary level in New Delhi on 4 April 2018 to hold consultations on regional and global issues of mutual interest. In accordance with the directions received from their Foreign Ministers, who met in New York on 18 September 2017 on the margins of UNGA, the officials explored practical steps to enhance cooperation ... .”

The joint press statement added, “The officials reviewed the outcomes of the Trilateral Infrastructure Working Group that met in Washington in February and agreed to continue to collaborate to promote increased connectivity in the Indo-Pacific.”

India, Japan, the US and Australia have already held consultations ahead of the proposed formation of a “quadrilateral” in the Indo-Pacific region to strengthen maritime cooperation. Observers have viewed the move as one that will counter Chinese military dominance in the region. Of the four countries, Japan and Australia are allies of the US while India and the US have considerably strengthened their strategic partnership in the past few years.

While the US and allies always used the term “Asia-Pacific” for the maritime region, this has been replaced now with the term “Indo-Pacific”, highlighting the importance given to India in the region.