Parliament logjam: BJP, NDA MPs to give up salary for 23 days

Ananth Kumar blamed the Congress for the logjam in both Houses, saying that it had engaged in “anti-democratic” politics. 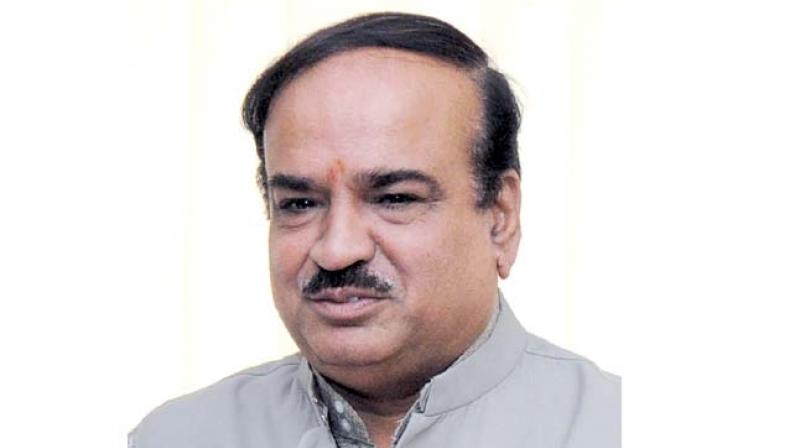 New Delhi: Squarely blaming the Congress, the main Opposition party, for disrupting parliamentary proceedings for three weeks, due to which several important laws could not be passed, MPs of the BJP and all parties in the NDA fold have decided to forego their salaries and allowances for 23 days of Parliament as a mark of protest against the disruptive tactics of the Opposition parties.

Parliamentary affairs and chemical and fertilisers minister Ananth Kumar told reporters at a hurriedly-called press conference late Wednesday evening, soon after the Union Cabinet meeting, that owing to the non-functioning of Parliament due to continuous disruptions by the Congress, BJP and NDA MPs had decided to forego their salaries and allowances for 23 days (equivalent to the time lost to disruptions).

“This money (allowances and salaries) is given to (MPs) to serve the people, and if we are not able to do so, we have no right to take the people’s money,” he said.

Mr Kumar blamed the Congress for the logjam in both Houses, saying that it had engaged in “anti-democratic” politics. The party stopped important bills from being passed, that led to a “criminal wastage” of taxpayers’ money, the parliamentary affairs minister said.

MPs of the NDA, which includes the BJP, would give up their salaries for the disrupted period of the session, he said. The ongoing Budget Session is due to end April 6.

The second leg of the session, that began on March 5, has seen a continuous washout of proceedings in both Houses due to vociferous protests by the Opposition and even erstwhile NDA ally Telugu Desam over a host of issues, like the Punjab National Bank scam, special status for Andhra Pradesh and formation of the Cauvery water board.

The Congress, TDP, Left and several other parties have also sent notices to Lok Sabha Speaker Sumitra Mahajan for no-confidence motions against the government.

Meanwhile, Leader of the Opposition in the Rajya Sabha Ghulam Nabi Azad on Wednesday blamed the government for the disruptions, saying it was running away from discussing various issues, including the demand for special status to Andhra Pradesh, Cauvery water distribution between Karnataka and Tamil Nadu, the CBSE paper leak and the PNB-Nirav Modi fraud. “An impression is being created outside that the Opposition parties are not allowing the House to function. But it is the ruling party which is running away from the discussion. The entire Opposition is for the passage of the pending bills. We also want these bills passed, but we are also mandated to raise the issues concerning millions of people.

“I am sorry to say it’s the treasury benches which are not allowing the House to function. See who is disrupting the proceedings. Let the country see,” he said, amid noisy scenes. The leaders of 13 Opposition parties met and urged the government and the presiding officers of the Lok Sabha and Rajya Sabha to allow a discussion on the issues raised by them, saying they were willing to have the Budget Session extended to pass the government’s legislative agenda. The Rajya Sabha had to be adjourned 10 times in a row amid protests against the Prevention of Corruption (Amendment) Bill.