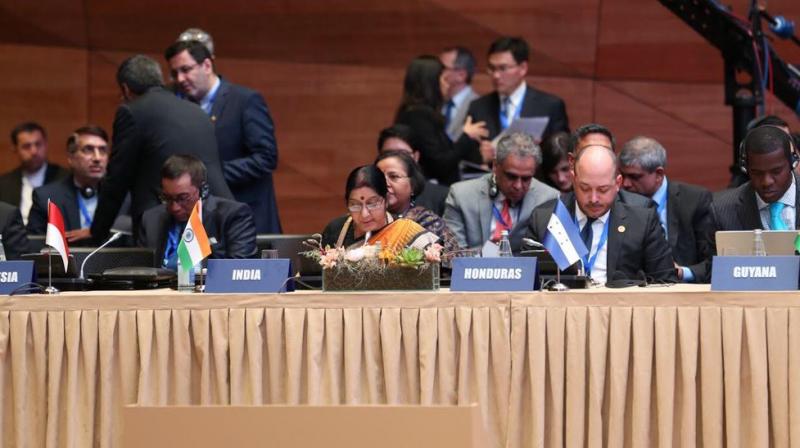 Sushma Swaraj was addressing the 18th mid-term ministerial meeting of the Non-Aligned Movement in Baku on Thursday. (Photo: Twitter/ MEAIndia)

Baku: Terrorism is one of the foremost threats to international peace and security as it maims and kills "our citizens", and undermines the ability to attain development goals, External Affairs Minister Sushma Swaraj said on Thursday.

India had been strongly pushing for completing the long-pending reforms of the powerful Security Council. Swaraj said that terrorism is one of the foremost threats to international peace and security. "It maims and kills our citizens and undermines our ability to attain our development goals.

"Unfortunately, the talks about combating terrorism have not been matched by our actions. The strengthening and implementation, without double standards of existing international laws and mechanisms to fight the menace of terrorism, is an imperative," the minister said.

The meeting was chaired by Jorge Arreaza, Foreign Minister of the Bolivarian Republic of Venezuela. In 1996, India proposed a Comprehensive Convention on International Terrorism (CCIT) as a way to strengthen the existing legal framework. Yet after more than two decades, discussions have made little progress even while terrorists continue to operate with greater impunity and inhumanity, the minister said.

"As a first step, let us renew our commitment to finalise the CCIT. NAM countries must galvanise the international community towards this goal," Swaraj said.

At the last UN General Assembly High-Level segment, a strong desire was voiced by the international community for change and reforms at the United Nations, she said. "To date, the Inter-Governmental Negotiation process has been carefully nurtured into a credible collective process for negotiation on this important subject. The time has come to move to the next phase and commence text-based negotiations – a demand made by an overwhelming majority of UN members including most NAM members," she said.

At the recent meeting in Rome to deal with the financial crisis faced by the United Nations Relief and Works Agency (UNRWA), India decided to increase its contribution to the UNRWA budget from USD 1 million to USD 5 million, on a multiple year basis, in view of the dire financial crisis that this body now faces.

"The challenges we face today such as nuclear escalation, armed conflict, refugee flows, terrorism, poverty and worsening environmental degradation – all require more effective multilateralism. The fundamental values and principles on which the Non-Aligned Movement is based are, therefore, even more relevant today.