Sarma said that craze of their state leaders for campaigning was equally high on demand. 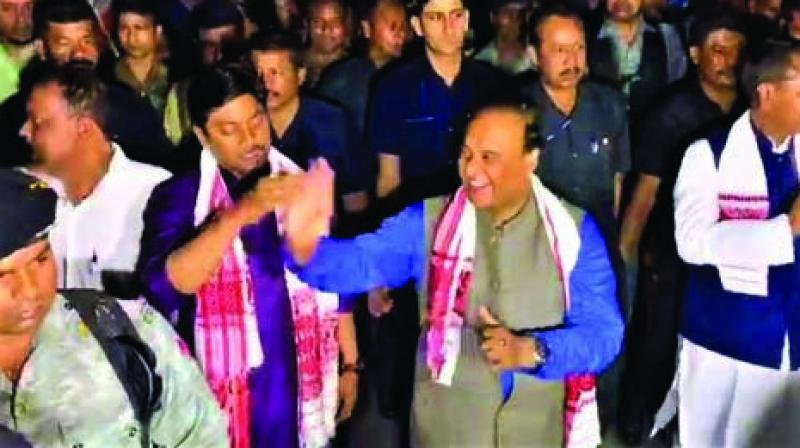 Guwahati: Bogged down by various controversies, Assam finance minister Himanta Biswa Sarma was leaving no stone unturned to ensure the victory of party candidates. If his road shows, at least two-three everyday, was attracting huge crowds, Mr Sarma, on Wednesday while campaigning aggressively for Pallab Lochan against Congress’ candidate MGVK Bhanu, broke into an impromptu jig on a jingle of the party — “Aakou Ebar, Modi Sarkar (Once again Modi government)”. This video of Mr Sarma dancing to the tune, Aakou Ebar, Modi Sarkar, has now gone viral on social media too.

Mr Sarma has been the star campaigner of the party on all 14 Lok Sabha seats of the state. If insiders in the BJP are to be believed, most of the BJP candidates are asking for public meetings and road shows by Mr Sarma. When asked about the demand of the candidate about campaigner, Assam BJP treasurer Rajkumar Sharma told this newspaper, “It is true that most of candidates are asking for meeting and roadshow of Mr Sharma and chief minister Sarbananda Sonowal.”

Admitting that many star campaigners like UP chief minister Yogi Aditya Nath and many others are schedule to hit the campaign trail, Mr Sarma said that craze of their state leaders for campaigning was equally high on demand.

The BJP has hired three choppers for the elections campaign during the Lok Sabha elections. Two are being used exclusively by chief minister Sarbananda Sonowal and his deputy Himanta Biswa Sarma. The third chopper is on disposal of state party units.