With the help of government assistance and crowd-funding, the villagers have rejuvenated a water tank called Hulikere. 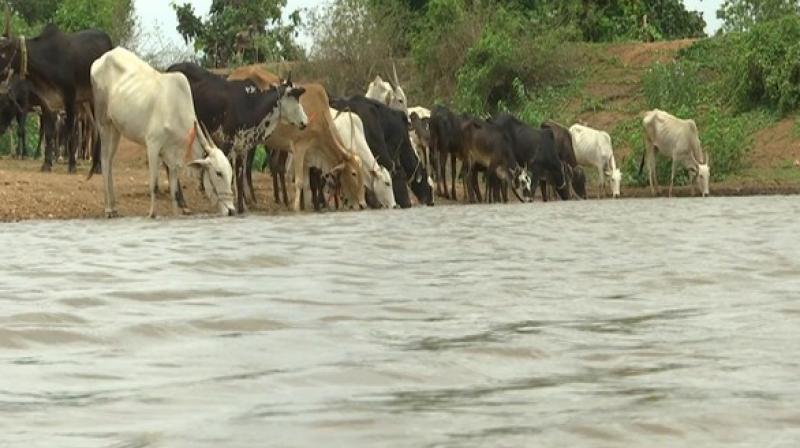 Shivamogga: Amidst the scorching heat and delayed monsoon across the country, residents of the Vitagondana Koppa village in Shivamogga district are living happily with sufficient drinking water and are easily able to meet the requirements of their livestock.

The Vitagondana Koppa village situated near Ayanuru town is an inspiration to many neighbouring villagers.

With the help of government assistance and crowd-funding, the villagers have rejuvenated a water tank called Hulikere.

The tank helps to keep groundwater stable and recharges the borewells. With its expanse reaching to over five acres, it is the biggest tank of its kind near the Shivamogga city.

A retired accountant from the village, Shivanadappa, deposited three lakh rupees from his pension to get approval for the tank restoration under the government scheme 'JalaSamvardhane' in 2011 and the tank till date has prevented the village from facing the water crisis.

"In 2011 there was a World Bank-assisted 'Jalasamvardhane' scheme which provided grants for rejuvenating traditional water bodies to keep the village green. At that time no villager had any interest in approaching the government. We just had to deposit three and a half lakh rupees to get the project sanctioned. I had recently retired and had around three lakh rupees with me, I came forward to save our tank and soon everybody joined. The tank has now been handed over by the government to the village for preserving water, we take care of it together. More people joined in, now the tank fulfills everybody's needs. I have never seen a drought in my village and surrounding villages because this tank helps to recharge the groundwater level," Shivandappa told ANI.

Rohith, a farmer requested the government to treat tanks and other modes of water conservation as a priority.

"In the old days, every village had a tank, today a lot of tanks have been destroyed or have been encroached upon. The tank is in itself an ecological system which should get priority by government to tackle the drought conditions," Rohith said.

At a time when the water crisis is deepening year by year, the example set by Vitagondana Koppa village is an excellent case study to improve the situation in the days to come.