AN-32 aircraft took off from Jorhat, Assam at 12:25 pm and and lost contact with ground agencies around 1 pm on Monday. 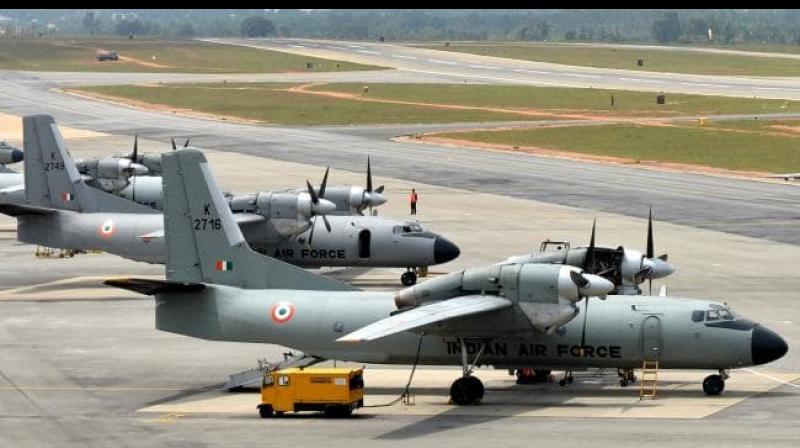 Navy in a statement yesterday said that its Long Range Maritime Reconnaissance aircraft P8I took off from INS Rajali in Arakonam, Tamil Nadu at 1 pm to join the search and rescue operation. (Photo: AFP)

New Delhi: The search operations for the missing AN-32 transport aircraft entered the third day on Wednesday.

"We are putting in all the resources available with us. We have put massive efforts through radar, satellite, visual by helicopters and by ground patrols again today," IAF officials said.

A team of 13 Air Force personnel along with satellites of the ISRO and Naval P-8I spy planes have been pressed into action over parts of Arunachal Pradesh and Assam to locate the missing AN-32 aircraft.

Meanwhile, Su-30MKI, C-130J Super Hercules and other assets at present are carrying out search operation in cloudy weather conditions.

Navy in a statement yesterday said that its Long Range Maritime Reconnaissance aircraft P8I took off from INS Rajali in Arakonam, Tamil Nadu at 1 pm to join the search and rescue operation.

Officials said the wreckage of the AN-32 transport aircraft which went missing on Monday in Arunachal Pradesh has not been sighted so far.

Defence Minister Rajnath Singh is being apprised of the situation by the Air Force on a regular basis.

The Antonov AN-32 with 13 personnel including seven officers and six air warriors on board went missing in Arunachal Pradesh.

The aircraft took off from Jorhat at 12:25 pm and was headed for Menchuka Advance Landing Ground (ALG) in Arunachal Pradesh near China border.

The last contact between the aircraft and ground agencies took place at 1 pm.

The Soviet-era aircraft was inducted in the Air Force in the 1980s and has been undergoing upgrades.

Three years ago, on July 22, 2016, an airborne AN-32 aircraft had gone missing with 29 people on board. The aircraft was travelling from Chennai to Port Blair in Andaman and Nicobar when it went missing over the Bay of Bengal.