India   All India  05 Jun 2020  Calm after storm: Long road to recovery for cyclone-hit people in Maharashtra
India, All India

Calm after storm: Long road to recovery for cyclone-hit people in Maharashtra

Battered by cyclone Nisarga, people are looking at the state government for help to rebuild their lives 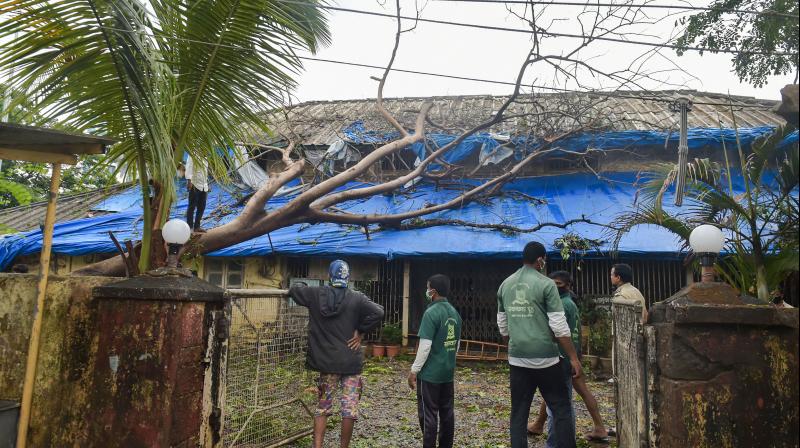 Workers prepare to chop an uprooted tree to clear the premises of a government building in the aftermath of Cyclone Nisarga, during the ongoing COVID-19 nationwide lockdown, at Panvel in Raigad district. PTI photo

Alibaug: Roofless houses, collapsed walls, uprooted trees and despair on faces of people - all these collectively tell the story of devastation and misery caused by the cyclonic storm 'Nisarga' that battered coastal villages of Maharashtra's Raigad district.

As the cyclone affected people pick up the pieces, they see a long road to recovery and return to normalcy in life which was thrown into disarray all of a sudden one afternoon. They are looking at the state government for help to rebuild their lives.

The cyclone that made landfall near Diveagar in Shrivardhan taluka of Raigad district on Wednesday afternoon battered the coastal tehsils for a few hours with heavy rains and gusty winds of a speed of more than 110 to 120 kmph.

Hundreds of houses were damaged, properties destroyed, electric poles flattened and trees lay uprooted in wake of the storm in Raigad, the worst-hit district.

Metkarni village in Shrivardhan, with a population of around 700, is one of the worst-hit areas in the district.

Situated on a hilltop, the village suffered severe damage as several residents were rendered homeless and penniless because of the storm.

A sole breadwinner for her family of four, Sunita Salve has lost the roof over her head and also livelihood to the natural disaster.

"There is nothing in my house now, the roof was blown away, a wall has collapsed and all essentials and utensils are damaged. Even my sewing machine, which was my only source of income, lies broken," said Salve, who did minor tailoring work to feed her parents and two children, with a sense of despair.

Salve and her family ran out of their home at the nick of time with whatever valuables they could carry when they heard someone shouting about the storm's arrival.

"Earlier because of the COVID-19 lockdown, we hardly had any work, but now our troubles have doubled due to the cyclone," Salve rued.

For Manjula Jadhav, Cyclone 'Nisarga' was nothing like what she had seen before in her life.

Jadhav, who lives with her two sons and their families, said all her possessions lay buried in the debris that was once her home.

"I urge the government to help people who have lost everything in the cyclonic storm," she said.

Another resident said she had built her home only two weeks ago using all her savings and by taking loans.

"I lost everything in just two hours. My family doesn't even have a place to live now," she said.

Local authorities had evacuated several people from coastal villages and moved them to a government building ahead of the cyclone.

And now many are waiting for the district administration to assess the damages and facilitate government aid.

The situation is similar in villages of Harihareshwar, Alibaug, Murud, Tala, Pen, Mhasala and Roha, where the cyclone left a trail of destruction.

"We have started assessing the damage. Shrivardhan and Murud talukas seem to be the worst-hit and teams have been sent there for timely assessment," Raigad collector Nidhi Choudhary told PTI.