In the video, the inspector is seen moving in a cavalcade of vehicles after his transfer. 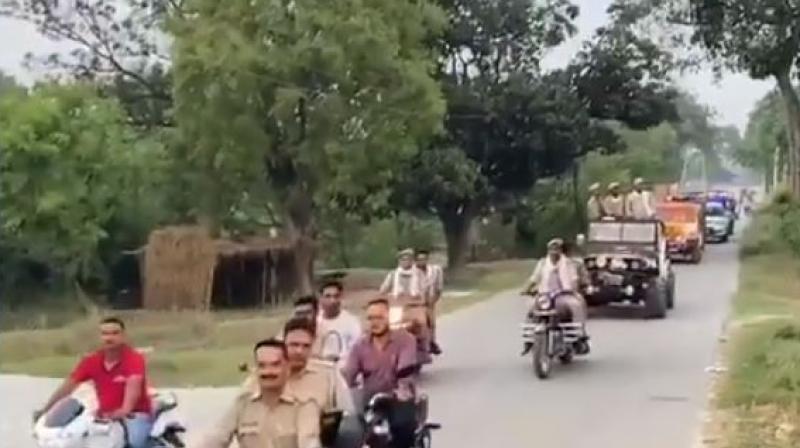 Screengrab of the video.

Lucknow: A video has surfaced showing policemen in Ambedkar Nagar district allegedly violating social distancing norms by following an inspector in a cavalcade of vehicles as part of his farewell procession, prompting the superintendent of police to suspend the cop and order the registration of an FIR.

Ambedkar Nagar Superintendent of Police Alok Priyadarshi said the police have taken cognisance of the video in which inspector is seen moving in a cavalcade of vehicles after his transfer.

In UP's Ambedkar Nagar district, several police vans, patrol vehicles of Dial 112 men on private motorcycles and cops in modified Jeep were part of the cavalcade in the farewell of SHO Manoj Singh who was transferred recently. pic.twitter.com/WFXofspp9B

"The inspector has been suspended and other cops with him have been sent to lines. A detailed probe is ordered in the matter," he said.

The SP said that a detailed probe has been ordered by the additional superintendent of police and an order has been issued to lodge an FIR against the inspector for not following social distancing under relevant sections of Indian Penal Code.

The cavalcade, according to sources, was held on Wednesday when someone shot the video in which policemen and residents violated the lockdown and no one was wearing a mask.

In the video, the SHO is seen sitting in an open jeep, which is garlanded, followed by another jeep, police vehicles and a number of four wheelers and two wheelers.