Centre said over 4,200 Shramik Special trains have been deployed to transport migrant workers to their native places 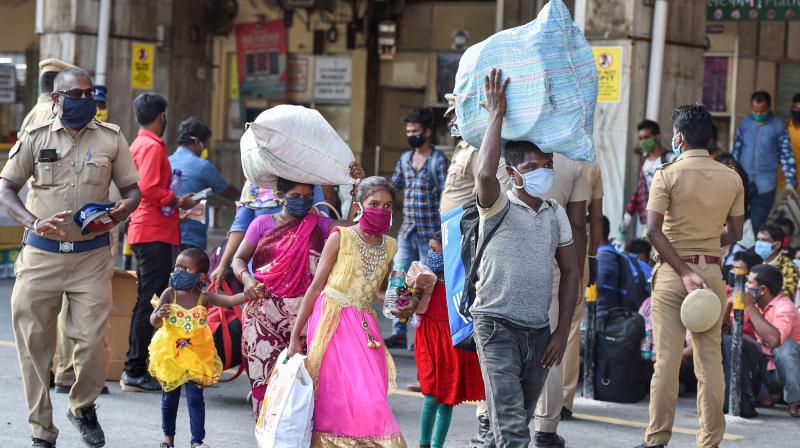 Migrants arrive at Central Railway Station to board a Shramik Special train for West Bengal, during ongoing COVID-19 lockdown, in Chennai. PTI photo

New Delhi: The Supreme Court Friday said it intends to give 15 days to the Centre and states for transporting all stranded migrant workers to their native places, commencing hearing on their plight during the Covid-19 lockdown period.

A bench of Justices Ashok Bhushan, SK Kaul and MR Shah was informed by Solicitor General Tushar Mehta that till June 3, over 4,200 Shramik Special' trains have been deployed to transport migrant workers to their native places.

Mehta said that till now over one crore migrant workers have been transported to their destinations and most of the trains ended up in Uttar Pradesh and Bihar.

He said state governments can tell as to how many more migrant workers need to be shifted and how many trains are required for that purpose.

The hearing in the case, which has been taken cognizance on its own by the top court, is underway.

On May 28, the top court had directed that the migrant workers wanting to return to their home states will not be charged train or bus fares and those stranded across the country will be provided food free of cost by the authorities concerned.