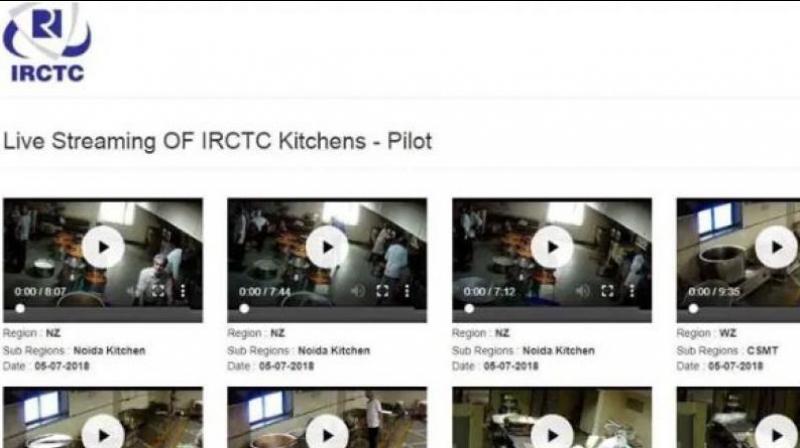 IRCTC live streams how the food served to passengers on train is prepared and packaged. (Screengrab | irctc.co.in)

New Delhi: Indian Railways has started live streaming from its kitchens so that millions of passengers can see how their meals are prepared after scandals including one involving toilet water caused uproar.

The state train provider is trying to convince commuters its food is safe after the government's own corruption watchdog labelled Indian Railways food "unfit for human consumption".

In May, public confidence took another blow when a rail caterer was filmed making tea from toilet water.

Complaints about rats and cockroaches near onboard kitchens, and meals plagued with insects, are also commonplace.

To clean up its image, Indian Railways on Wednesday launched a streaming service on its website allowing travellers to scrutinise hygiene levels in their major kitchens.

"This step will further enhance transparency and public confidence in the food preparation and packaging process across the Indian Railways network," its catering wing IRCTC said on Twitter.

Private caterers also supply packaged food to the network, one of the world's largest.

The private caterer behind the toilet tea saga was fined 100,000 rupees for the incident that outraged commuters.

The Comptroller and Auditor General, a government watchdog, said in a 2017 report that meals served aboard Indian trains were "unsuitable for human consumption".

It said meals were often contaminated and included recycled or expired food, and counterfeit brands of bottled water.

The report also accused railway providers of unhygienic conditions on board train carriages.

Indian Railways runs nearly 13,000 trains every day, with some 24 million travelling across the length and breadth of the British-era rail network.