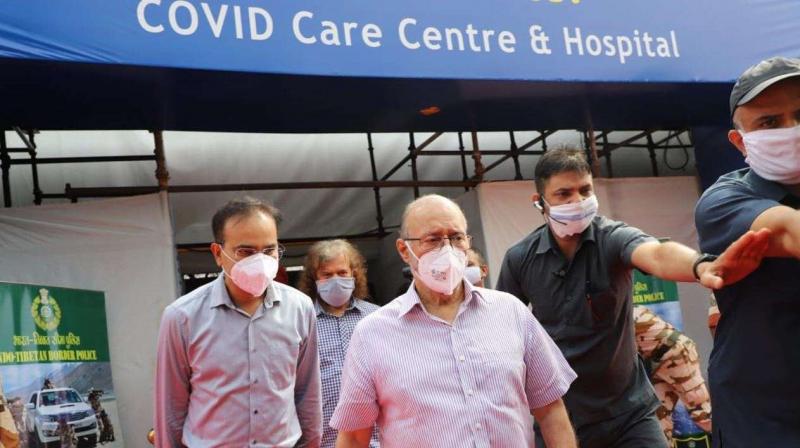 New Delhi: Delhi Lieutenant Governor Anil Baijal inaugurated the 10,000-bed Sardar Patel COVID care centre, one of the "largest" such facilities in the world, at the Radha Soami Satsang Beas here on Sunday, saying it will play a crucial role in the fight against the pandemic.

Baijal reviewed the availability of beds, oxygen cylinders, concentrators, ventilators, ICUs and medical staff at the centre set up in Chhatarpur.

He also congratulated the Indo-Tibetan Border Police (ITBP) on taking over the facility.

While the Delhi government has provided administrative support, the ITBP is the nodal agency operating the Centre under the name "Operation Corona Warriors".

With the guidance and support of Union Home Minister Amit Shah, Delhi now has one of the largest COVID-care facilities in the world, which will play a crucial role in the fight against the pandemic, Baijal said.

"Advised to keep special focus on severely ill patients and if required, shift them to dedicated Covid hospitals. Instructed SDMC to ensure cleanliness and sanitation at the centre. Management of Covid centre by ITBP is greatly appreciated," he said in a tweet.

At least 20 patients are expected to reach the facility on Sunday, a senior ITBP official said.

"The total bed capacity at the centre may go up to 10,200, making it the largest COVID-19 care facility in India so far," the ITBP said in a statement, adding that it is also the "largest such facility envisaged worldwide".

It has two segments -- a COVID Care Centre (CCC), where asymptomatic positive coronavirus cases will be treated and a Dedicated COVID Health Care (DCHC), which will treat symptomatic cases and have an oxygen support system.

The CCC will have 90 per cent of the beds, while the DCHC will have the rest.

More than 1,000 doctors, nurses and paramedics of the ITBP and other Central Armed Police Forces (CAPFs), and another 1,000 paramedics, assistants and security staff have been deployed at the facility for its smooth operation.

ITBP Director General SS Deswal, who attended the inauguration ceremony, said a team of counsellors and psychiatrists will also be present at the facility to help those who are stressed or traumatised due to the coronavirus outbreak.

The force has made adequate arrangements at the centre, including for security, a reception, a call centre, nursing stations, command control stores, maintenance staff etc.

A robust admission and monitoring system has been prepared as an "e-hospital", wherein details of patients such as the ambulances that brought them in, symptoms, dates of admission etc. will be collected, shared and monitored digitally, the ITBP said.

E-vehicles and ambulances have also been deployed for facilitating the movement of patients inside the centre.

Apart from peripheral and close-camp security, a special "Quick Reaction Team" is also deployed at the centre to attend to sudden security requirements.

Volunteers from the religious sect of Radha Soami Beas will also help run the centre.

The home minister had inspected the facility on June 27 and motivated the ITBP staff deployed there.