Dhami takes oath as some BJP leaders sulking in Uttarakhand 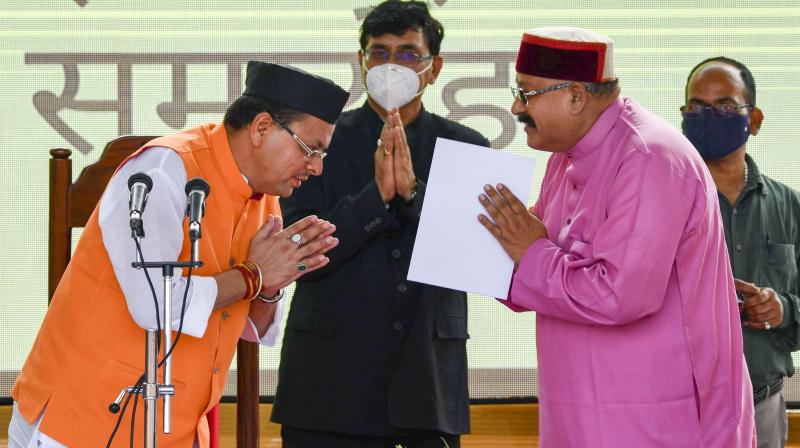 New Delhi/Dehradun: A “third generation” BJP leader, Pushkar Singh Dhami, took the oath as Uttarakhand’s 11th chief minister – the third in the last four months -- on Sunday, the day the BJP central leadership intervened to exhort some senior state leaders to “accept” the “unanimous decision” taken by the legislature party of choosing Mr Dhami as its leader.

Mr Dhami along with 11 ministers -- all of Cabinet rank -- were sworn in by governor Baby Rani Maurya on the Raj Bhavan lawns in Dehradun. While the BJP central leadership is yet to officially announce whether or not it will go to next year’s Assembly elections in the state with the current CM’s face, some state leaders, including state unit chief Madan Kaushik, insisted that Mr Dhami will be the face of the party.

Sources said Union home minister Amit Shah called some of the sulking leaders, who felt that the central leadership had completely sidelined the “second generation” leaders to choose a “third generation” leader for the CM’s post. The party leadership, sources said, made it clear that the decision was taken keeping in mind the coming Assembly polls, winning which should be the priority of all state leaders.

Already facing factionalism in the ruling party’s state unit, no new face was among the 11 ministers who took the oath Sunday. Mr Dhami’s team so far has members who were ministers in Tirath Singh Rawat’s team.

With the Assembly polls just a few months away, the major challenge for the new CM will be to contain factionalism and improve the party’s image, which has taken a serious hit in the past few months, than a resurgent Opposition.  While the Opposition Congress has been gaining strength, the BJP’s popularity graph in the state seems to be on a decline.

Covid-19 mismanagement during the Kumbh Mela, anger among saints and sages over the Char Dham Devsthanam management board, rising unemployment and the growing demand for state-specific land laws to curb the rampant sale of land to non-Uttarakandis, are just some of the issues for the new CM to tackle.

Earlier on Sunday, Mr Dhami, who was “unanimously elected” as the legislature party leader on Saturday, a day after his predecessor tendered his resignation due to a “constitutional crisis”, met senior leader Satpal Maharaj at his residence with a bouquet of flowers. Satpal Maharaj, who later took the oath as a Cabinet minister, was sulking over the sidelining of senior leaders for the CM’s post. Mr Maharaj was camping in national capital when Tirath Singh Rawat was holding consultations with the BJP central leadership earlier this week.

The new CM later claimed that there was no resentment in the party, something which his Cabinet colleagues Arvind Pandey, Dhan Singh Rawat and Rekha Arya also repeated after taking the oath.

Before taking the oath, Mr Dhami also paid courtesy visits to his predecessors Tirath Singh Rawat and Trivendra Singh Rawat at their residences and another former chief minister and BJP stalwart, Bhuvan Chandra Khanduri. A Thakur leader from Uttarakhand’s Kumaon region, Mr Dhami was associated with the RSS’ youth wing ABVP during his college days.