Says freedom struggle not confined to a few families 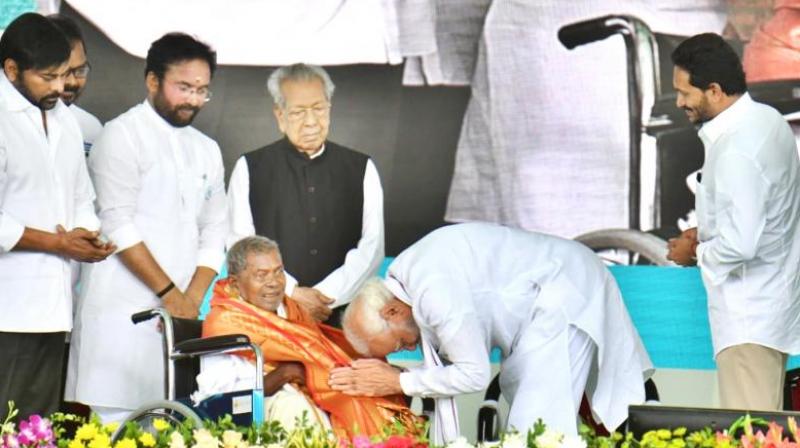 KAKINADA: Prime Minister Narendra Modi on Monday said that the freedom struggle against the British was waged by the entire society under the leadership of great leaders like Alluri Sitarama Raju and cannot be credited to few people or families. He also called upon people to transform India into a land that reflected the dreams of the freedom fighters.

“As we celebrate the 75th anniversary of Independence, the responsibility is on every citizen to fulfil the dreams of the freedom fighters. Our New India should be an India of their dreams. Such India, where the poor, farmers, workers, backward classes, Adivasis and oppressed have equal opportunities,” the Prime Minister said.

The Prime Minister was speaking at a large public meeting at Pedamiram in West Godavari district after unveiling a 30-feet bronze statue of legendary freedom fighter Alluri Sitarama Raju on his 125th birth anniversary.

“Many unsung heroes like Kanneganti Hanumanthu, Kandukuri Veeresalingam Panthulu and Potti Sriramulu have sacrificed their lives for India’s freedom and we should remember them and recall their services forever,”' said the Prime Minister at a meeting attended by Andhra Pradesh Governor Harichandan Biswabhusan, Chief Minister Y.S. Jagan Mohan Reddy, Union tourism minister G. Kishan Reddy and former Union minister Chiranjeevi among others.

He also noted the contribution of Pingali Venkaiah, a freedom fighter from Andhra Pradesh, who designed the ‘Tricolour'’, and said that people “should remember and recall all their services forever”.

The Prime Minister said Alluri Sitarama Raju's 125th birth anniversary should be celebrated in every village for the entire year.

He also observed, “This is not only the occasion of the 125th birth anniversary of Alluri Sitarama Raju and the 75th anniversary of Indian Independence Day, but this year also marks the 100 years of the Rampa Rebellion which was led by those like Sitarama Raju against the British rule. Alluri began his fight against the British at a very young age of 24 years. Barely after three years after his struggle, he sacrificed his life,” the Prime Minister noted.

The Prime Minister said the government would highlight the sacrifices of Alluri Sitharama Raju at national and international levels.

The Prime Minister also recalled how Alluri Sitarama Raju had fought for improving the living conditions of the Adivasis in the agency area and said that his government has been implementing many welfare schemes for the Adivasis.

He also promised that the government would develop the places linked to Alluri Sitarama Raju. “All the places like Alluri’s birthplace of Pondrangi in Visakhapatnam district, Mogallu in West Godavari district, Chintapallil village (where Alluri attacked a police station), Rampachodavaram (of the Rampakranthi movement) and others would be developed as tourism spots by constructing memorial parks, a Dhyana Mandiram, museums etc," the Prime Minister said.

Modi said a memorial park would be set up at Lambasingi in Visakhapatnam district and an Adivasi research centre named after Alluri Sitarama Raju and a skill development centre will be built in Visakhapatnam. “All these areas would be modified with facilities reflecting the culture and heritage of the tribal people,” the Prime Minister said.

The Prime Minister also greeted the family members of Alluri Sitarama Raju, as also of Gantam Dora, Mallu Dora and others who were close to Alluri, who participated in the celebrations as the special invitees.